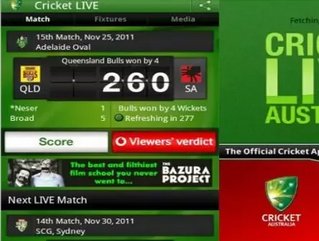 From the beaches to the mountains, cricket fans around Australia will be able to remain up-to-date on the latest matches and news thanks to Vodafone's new app, Cricket LIVE.

Equipped with live match video streaming, the app is available for download on both Android and Apple-supported operating systems. iPhone and iPad users will have access to the full matches through the Australian network, while Android users must rely on the Vodafone and 3 networks.

A 'major drawcard' expected to boost downloads of the app is the 'Vodafone Viewers' Verdict' feature, which will allow users to cast their vote on umpire calls during the matches. Votes will be tallied and then broadcasted live on the Channel Nine news network.

“We’ve had a huge number of cricket fans voting via the Vodafone Viewers’ Verdict, and the Cricket LIVE Australia app has been one of the most popular apps to download this summer,” Vodafone Hutchison Australia (VHA) PR executive, Kyra Washington, told ARNnet.com.au.

An additional app feature is Cricket LIVE TV, which provides the ability to watch any Test, ODI, T20 and Big Bash match live with an Event Pass ($2.99 for a single match) or a Season Pass ($9.49 for all games throughout the season.)

The app may be downloaded here.

No iPhone? No problem: non-smartphone or tablet owners may access live scores, news and videos by texting "Cricket" to 126677.

Be sure to check out Vodafone.com.au for other fun cricket-inspired features, such as the personal message Cricket-a-gram, or enter the competition to win a day with Adam Gilchrist or Layne Beachley.