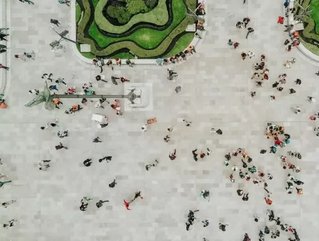 With Chinese drone manufacturer EHang reportedly gearing up for a US IPO, we take a look at the promise of urban aerial mobility fueling the buzz.

EHang refers to its technology as autonomous aerial vehicles (AAVs). Different models include the passenger-grade EHang 216 as well as the non-passenger EHang Falcon. The 216 can carry 220kg and fly at 130km/h (Just over 80 mi/h) and runs on battery power. Passengers supposedly need only choose their destination on a mobile app, with the vehicle handling take-off, travel on predefined routes, and landing.

Passenger-carrying demonstrations have already taken place in numerous Chinese cities, including EHang’s home of Guangzhou, and worldwide in places such as Austria, Qatar and the Netherlands.

Back in August, the company selected the city of Guangzhou as a pilot location for urban air mobility – the transportation of people via drone. That initiative was pre-commercial, and intended to demonstrate the feasibility of the project as it tested routes for both passengers and goods.

Since then, EHang has achieved a number of other milestones, including a traffic management certification. Though this might sound dry, such systems are vital for the technology’s success, consisting of fenced areas and zones prohibiting and allowing access.

Zhang Zhengjuan, a senior engineer at the Civil UAS Inspection Center of the China Academy of Civil Aviation Science and Technology said the development marked “a breakthrough in urban air mobility space. Significantly, EHang’s command-and-control system is more intelligent in managing the AAVs’ flight routes, and with real-time remote communication via 4G and 5G telecom networks, their operation is simpler and safer than conventional drones manual-controlled by radio frequency within limited distances.”

Urban aerial mobility is poised to become a revolutionary new technology. With established giants of the likes of Boeing and Airbus already dipping their toes, Morgan Stanley predicts the market could be worth $1.5trn by 2040.