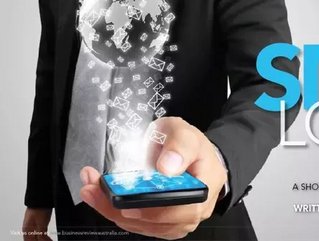 Let’s face it: we’re busy people. We have things to do, places to go, people to see, deadlines to make – the list goes on and on. Fortunately, there is an increasing number of businesses entering the market who empathise with our full diaries and lack of desire to waste precious daily minutes standing in line for the goods we need to get through the day – and these folks know we always have our mobiles on us.

Our mobiles have evolved to the point where they’ve become so much more than a device to make calls: they are on-the-go sources of information that allow us to communicate with loved ones while simultaneously keeping us informed about the world.

According to a recent infographic discussed on Mashable, 57 per cent of us check our email less than four times per day, but we check our mobiles approximately 150 times a day. Right there is the next-generation marketing strategy for businesses: text messaging.

“It’s really simple and fast, [two] of its great strengths,” said Warwick Purves, Director at Oxygen Interactive Marketing in Australia.“You can have an idea and communicate it to your customers literally within minutes.”

What started as a simple way for small to medium-size businesses to connect to their customer base has since been integrated into the marketing strategies of bigger businesses. This method “works well with local businesses a consumer knows and has a relationship with,” said Mr Purves.

Taking this concept a step further, an Australian business called Hungry Apps has launched two convenient services for those who are truly phobic of waiting in line: TXT4Coffee allows the user to SMS their coffee order in to over 300 metropolitan coffee shops, pay via their prepaid account, and skip the queue upon pickup, and TXT4Subway  offers a similar service on sandwiches.

“The idea behind what we did was to make it very scalable so eventually, when the name spreads, retailers can grab an old iPhone or Android or even iPod touch, download the app, set up their menu, and open for business,” said company founder and Chief Executive Officer Daniel Filmer, who first launched TXT4Coffee in mid-2011.

Having developed the concept out of frustration over a favourite coffee shop that often featured a line around the block, Mr Filmer has seen his idea take off running with retailers he hasn’t even approached personally.

“[The business] opens that day and their customers start jumping the queue and posting on Facebook about how great a service it is. We then contact them and welcome them over to build a better relationship with them,” said Mr Filmer. “We’re finding that happens several times per week and we’ve never even spoken to the business.”

Despite Australia’s second-highest penetration rate of smartphones, ordering doesn’t require an app; a simple SMS or quick login to the website also works. “We didn’t want to write off the mobile community who hasn’t adopted smartphones yet,” said Mr Filmer.

Besides the immediate-time benefits, mobile strategy also has the added perks of convenience and environmentally-minded thinking. “If you receive direct mail, you don’t always have it with you when you return to the store,” said Mr Purves. “One of the greatest strengths of mobile marketing is that everyone usually has their phone with them.”

Perhaps the best part about this strategy: it doesn’t require the latest Apple innovation to work. “Even a ‘dumb phone’ can send an SMS,” said Mr Purves.

“Email is dying through spam filters,” he continued. “SMS marketing is more targeted and because it’s more expensive, brands have an understanding about the balance between being obtrusive and adding value.”