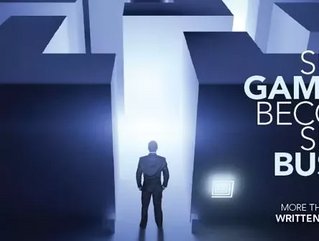 It’s becoming clear that computer games for learning, or serious games as they have come to be known, have a role to play in the classroom, alongside other teaching and learning resources. But serious games extend beyond the classroom and are being used more and more in the workplace. And in the near future we’re going to see an escalation in serious games in the home, providing thought-provoking and engaging activity available on-line, through social media sites and apps stores.

A recent survey conducted by ESA 2011¹ shows that, surprisingly, more adults between the ages of 18-50 play computer games than kids under the age of 18. On the one hand, it’s easy to dismiss these results because the 18-50 range captures a larger demographic, but this is missing the point. What this clearly shows is that more adults, with an average age of 37, are playing computer games than ever before.

In comparison to video games, whose primary function is entertainment, serious games have a purpose, whether it’s to learn, train, inform, persuade, for health and well-being, etc. and serious games are already being used in education, military, with emergency first responders and business just to name a few. For example, IBM has been quick to identify their power. They’ve developed freely available games CityOne and Innov8 to learn, understand and “play” with business concepts and complex systems. Caroline Taylor, IBM UK & Ireland Vice President - Marketing and Communications says serious gaming is especially effective to “train the workforce of tomorrow, give them the skills that they are going to need as well as improving the skills of the people who are already out in the business environment today.”

And it appears that not only are serious games effective when it comes to learning, but students are embracing their use in the classroom. Studies carried out at Hwa Chong Institute (an independent high school) in Singapore, in collaboration with the Massachusetts Institute of Technology’s (MIT) Education Arcade, have shown that students have increased learning and fun², and appear to be highly motivated when serious games are blended with other computer-based teaching and learning resources in the classroom³.  As one teacher said in a survey, “the digital natives in classes can’t get enough of ICT tools”. Results from the most recent study will be presented at the Serious Games Development & Application 2012 conference in Germany in September.

Generation Y are now students in our universities and make up the young workforce. So it makes sense to adopt serious games as an additional teaching, learning and training resource to keep in-step with the “digital natives” and the rise in popularity of computer games or face the prospect of being left behind.

In universities, the introduction of computer game design has been a popular approach to boost dwindling student degree enrolment numbers and provide a competitive edge over counterparts offering similar, if not identical, curricular. Likewise, the introduction of serious games (incorporating topics of gamification) is expected to help attract students and sustain student numbers, as well as provide skills that are essential for the future of business and education.

So how and what can we learn from serious games? The simple answer is where there is a system, it can be made into a game and gameplay allows us to learn about its complexities in an engaging, thought-provoking and entertaining way.

Tim Marsh researches and lectures game design and human-computer interaction at James Cook University, Queensland, Australia. He has collaborated on various serious games research projects including Massachusetts Institute of Technology (MIT), and consults and advises on serious games, in addition to research and development of serious game simulation to explore and learn about data from the reef in Australia (to be presented at Coast to Coast 2012 in Brisbane.) He is also the co-editor of the book Serious Gaming & Social Connect 2012. His website is: www.seriousgames.sg