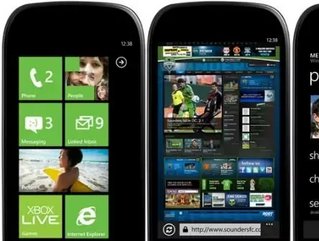 Smartphone manufacturer HTC will be among a group of companies that are now carrying Microsoft’s new Mango Windows phone software, HTC Chief Executive Peter Chou told Reuters on Wednesday in Paris. “We are very committed to Windows phone products,” he said.

For instance, the Quick Cards feature combines searching with the experience of an app. Users can type in a Bing search query and get related information and apps. Mango can link location data, information about a subject and shopping options. “The results are presented to the user as related views on the screen, instead of links to Web sites as in conventional search,” The New York Times reported this week.

It’s also an improvement upon the Mango also improves the tile user interface that Microsoft deploys, rather than  the widgets and app shortcuts that iOS and Android users are accustomed to.

While this is just a stepping stone to a complete Windows phone software upgrade due next year, it shows that Microsoft is gearing up to compete with Google and Android in the competitive OS sphere.

When the new Windows Phone 7OS is launched later this year, Samsung, LG, Acer, Fujitsu and ZTE will feature it, as well as Nokia who announced in February it would ditch its smartphone software and adopt Windows Phone 7.