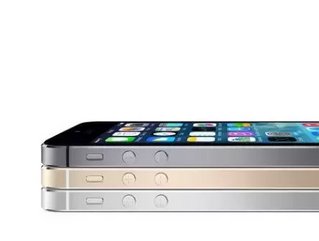 The iPhone 5S has been the talk of the town in the smartphone world, since CEO Tim Cook revealed it at Apple’s Cupertino HQ. Complete with a fingerprint scanner and an improved camera, while being up to twice as fast as the previous generation, the iPhone 5S is set to be another successful smartphone entry.

Starting with the look and feel of the highly anticipated addition to the A* iPhone family, the 5S looks very similar to the 5 apart from the obvious addition of the gold version (which surprisingly is getting rave reviews… who knew). It also has a different home button, which is flush to the phone rather than curved and without the signature square icon.

The camera has been considerably improved as well, by physically increasing the size of the images sensor, which will make a difference to the quality of images particularly in low light conditions. The 5S also has a burst mode (taking up to 10 shots per second) and a slo-mo option for video, both of which will be perfect for action shots.

The most talked about feature of the iPhone 5S seems to be the Touch ID fingerprint sensor, which is Apple’s first attempt at a fingerprint reader. Located under the traditional home button, the scanner allows users to access their phone without a pin number but also purchase apps and software updates. The sensor is a major step forward in phone security and is being hailed as a great first foray into the technology by experts. Of course the update comes with a brand new operating system iOS 7, which will give all Apple’s super user-friendly apps and features an update, no faults there.

The main thing for me is the fact that the fingerprint sensor could seriously enhance the user experience by doing away with damn passwords. The look and feel is strong as ever and the battery life and internal processors have had a revamp too. I cannot wait to get my hands on one.