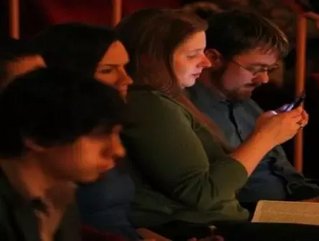 Twitter finally got the message: theatre patrons who sit on their phones while a performance is going on are really annoying.

Therefore, an innovative new idea to accommodate the constant Tweeters has launched in Melbourne. Called “Tweet Seats,” the four back-row seats at La Mama are reserved – free of charge – for audience members whose thoughts must be broadcast at that exact moment and not a moment later.

"A lot of young people tweet in the theatre anyway, so I thought, why not embrace it," Director Petra Kalive told the Herald Sun.

While this idea seems ludicrous in a setting where audience members are supposed to be engaged in what’s going on onstage, Kalive sees the marketing potential of tweeting after the curtain call.

"It could potentially be a wonderful medium to get new audiences, create a buzz around a show and get people talking about theatre,” she said.

Phones must be in silent mode with dimmed lighting in the theatre and users must only engage in social media activities – but it remains to be seen how this could possibly be enforced without a heap of disruption. A similar initiative in the US has been met with a great deal of disdain according to letters submitted to USA Today.