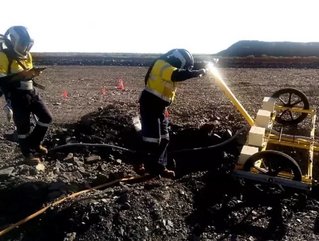 It’s been 25 years in the making, but a labour of love from Gap Geophysics Australia CEO Dr Malcolm Cattach is defining the next frontier of mining exploration.

GapGeo Group specialises in the development of leading edge geophysical technologies and provision of services to the exploration and environmental industries globally.

The group is comprised of three companies: Gap Geophysics Australia, which specialises in mineral exploration; Gap Explosive Ordnance Detection (GapEOD), which specialises in instrumentation and services for the detection of terrestrial and marine unexploded ordnance internationally; and Gap GeoPak, the research and development arm and technical support base.

Historically, electrical geophysical surveys have only been able to survey to fairly shallow depths but now, thanks to an idea borne in 1993 as part of his PhD, GapGeo CEO and chief geophysicist Dr Malcolm Cattach’s unique and award-winning Sub-Audio Magnetics (SAM) and HeliSAM technology provides a cost-effective solution for deep penetration electromagnetic (EM) surveys, enabling the mineral exploration and environmental geophysics industry to be able to explore to much greater depths than we ever have before.

“Most geophysicists would agree they've got a bit of an innovation bent,” admits Dr Cattach. “We're always trying to improve the way that we do things. My PhD demonstrated that SAM could actually work, but at that stage, it was ahead of its time: it wasn't until the early 2000s that the electronics, processing capabilities and storage devices became available that makes it practical to do with electronics. “Then from about 2005 onwards, since we formed Gap Geophysics, it's been more of our commercialisation stage.”

25 years since its ideation, SAM is a patented technique that allows for the simultaneous high definition mapping of both the magnetic and electrical properties in the ground, without sacrificing quality or efficiency.

Conventional EM surveys require grounded electrodes, levelled sensors and stationary measurements limiting the terrain that can be covered in a day. As a result, spatial resolution is often sacrificed for survey area coverage rates – but the SAM technique bypasses such issues, providing particularly good value for money.

“It's always tricky to explain technical stuff in simple terms,” he laughs. “But the future of exploration is going to be exploring to much greater depths. Consequently, we will be much more dependent upon geophysics to provide high-quality drill targets at depth.

“We build very high-powered geophysical transmitters to actually get our signal down deep and to cover large areas. What we've been trying to achieve with SAM is to provide much better-quality geophysical information much more cost-effectively. SAM gives us the ability to acquire electrical property information of the earth at a very high spatial resolution, quickly.”

SAM can be employed for a wide variety of survey types, mainly mineral exploration, explosive ordnance detection and geotechnical mapping as it is well suited to overcome the difficulties of highly conductive surface layers, such as with salt lakes.

“Conventional electromagnetic surveys have only been looking down to about 200 or 300 metres,” he explains. “But generally, people believe that near-surface deposits have probably already been discovered because of their relative ease of detection.

“If you assume that people historically surveyed down to 300 metres, then that means that that depth range between 300 metres and 1000 metres is the next frontier of the mining exploration.”

Moreover, the low frequency (LF) HeliSAM technology has shown outstanding results at the Forrestania Test range in Western Australia’s wheatbelt region, showcasing to the Australian market what can now be achieved.

“However, there's a limit to the amount of power that a helicopter system can produce due to the weight and size of the loop and transmitter. That in turn, limits the depth penetration with a pure helicopter-borne system.

“LF HeliSAM allows us to gather very high-quality data over large areas very cost effectively, compared to trying to do it at ground level only. We are able to generate enormous power from the ground-based system and combine it with the speed of acquisition that you get from a helicopter, so we've got the best of both worlds… In addition, we are able to use very low transmitter frequencies. There’s no other technique quite like this. This is a world first in getting down to those transmit frequencies.”

Following a presentation Dr Cattach recently delivered on his Sub-Audio Magnetics (SAM) and HeliSAM technology at the Australasian Exploration Geoscience Conference in Sydney, both he and his co-authors were awarded the peer-voted Laric Hawkins Award for geophysical innovation in recognition of the continued development of technology, of which SAM and HeliSAM is being considered an industry ‘game changer’.  It’s his sixth award, and Dr Cattach says it’s an honour to be recognised for the work he started a quarter of a century ago.

“My career's been involved with thinking of the concept back in the late 80s and early 90s, proving the feasibility of it and then putting the technique into practice.

“Since we privatised the business we've gone to this more commercial mode. But we've never stopped doing R&D. I've been very fortunate to have a group of very capable scientists and engineers around me, who've been able to continue to develop the various techniques.”

The Australian mining and exploration industry is recovering after a difficult few years, and Dr Cattach claims the industry needs to be in a good state to be able to continue to embrace new technologies.

“It doesn't matter how good technologies are if nobody's got any money to spend on them!” he laughs. “This technology has been coming into maturity over the last few years, when the industry's been in pretty poor shape, but it's only really now that you get this sort of confluence of the technology coming together in time when the industry's starting to get going again. Like everybody who works in the mining industry, we've had our struggles, but we certainly see the next few years as being very positive for us.”

“Some people are hesitant to try and take on something new and different that no-one's done before, because if it doesn't work, you're in trouble.

“Trying to battle that mentality has been a little bit awkward at times, but I’m grateful to a lot of our clients in the industry who've been prepared to think outside the box – it’s their willingness to try new things which has enabled us to continue development of SAM. They appreciate what we're trying to do and have supported us in trying to get through the door in revolutionising exploration, which is what our main goal is.”

GapGeo’s focus for the next few years is commercialisation and the business has been looking at finding other partners who are working in different parts of the world to start exporting the technology worldwide.

“With SAM and HeliSAM, I’m excited about commercialising something we've been working on for such a long period to the rest of the world,” he concludes. “They’re Australian home-grown technologies, and I’m proud of that.”