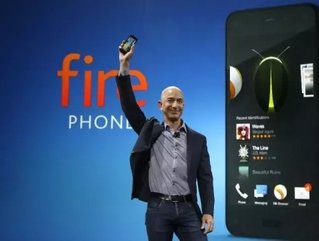 Amazon’s introduction to the mobile phone market was met with excitement, confusion over some of the features and a lot of anticipation for a release. The phone has now been out in the US for a month and the reviews are pouring in. When this phone becomes available in Australia, should you make the switch?

Amazon has brought some innovative, helpful features into their first mobile. Before the phone was announced, speculation was swirling about the possibility of 3D technology. The company instead introduced "dynamic perspective," which gives the illusion of 3D. The feature allows the user to "tilt, auto-scroll, swivel and peek to navigate menus and access shortcuts with one hand," said the product summary from Amazon.

Dynamic perspective has brought new options and innovations to apps and games - like allowing the player to peek behind a corner before continuing on in the game. The interesting perspective mode (which can be switched off if the user doesn't like it) is made possible by four cameras in each corner on the face of the phone. These cameras scan the location of the user’s eyes in respect to the phone so the image on the phone adjusts accordingly.

"Firefly" technology seems to be the most helpful new feature offered on the Firephone, especially those who are dedicated Amazon users and shoppers. Firefly identifies printed web and email addresses, phone numbers, QR and bar codes. Many mobiles can do this, but the Firefly goes a step further. Because of Amazon's media prowess, the Firefly option also identifies 100 million items like movies, TV episodes, songs and products. Of course, once these media options have been identified, the app takes you to Amazon for purchase opportunities.

The Mayday feature is available on the Kindle Fire, so it's not necessarily a new innovation to the Fire Phone. There's a separate button on the device that connects the user to free, live support with an Amazon expert, 24/7, 365 days a year. The service doesn't even need the user to schedule an appointment.

A huge free option (at least for the first year) is a subscription to Amazon Prime. Mobile users receive unlimited streaming and downloads for thousands of movies and popular TV Shows, millions of songs and over half a million books. When ordering from Amazon, users will have free two-day shipping on most orders.

The Fire Phone will be offered in Australia with 32 or 64 GB of storage. With the media capabilities of the mobile, it makes sense that a measly 16 GB isn't an option. The free unlimited photo storage in the cloud compliments the 13MP camera with a fast 5-element wide aperture f/2.0 lens. There is a dedicated, separate button on the side of the mobile specifically for the camera. This feature is especially helpful, as holding other mobiles to snap a picture by touching some portion of the screen can be awkward.

Data from the phone is automatically backed up to Amazon's cloud drive, so you can access it even if you do not have your phone. The apps and tools on the phone are Android-based: a proven, reliable system for your applications from Google.

As the reviews pour in from the US release, the rating of the Amazon Fire Phone is what many would expect out of a first-generation mobile device. A lot of the reviews are positive and many believe future generations of the smartphone will be on-par, but many point out there is something to be left desired with Gen One of the Fire Phone.

One of the most commented-on features is the high-quality sound system. It's a Digital Dolby Plus, so a decent set of earphones will have you enjoying your tunes. In fact, the earphones that come with the device have a magnetic pad, which draws the earphone together to reduce tangle. Users would probably get better sound from a more expensive option, but the functionality with the included headphones is hard to pass up.

The Mayday option is great for those who are less tech-savvy. Several users in the US who have been confused by the hand gestures and lack of a back button in some apps have found the Mayday button to be very helpful. Others have shared that the customer service Amazon is providing on their phone, from questions to replacements to returns, has been impeccable.

Although the design is a bit lackluster, the Fire Phone is sturdy. Reviewers on Amazon's page about the project have mentioned its design is similar to smartphones from a few years ago, but that it can take some tumbles and still keep working. A case for this mobile device would be more for design than for protection.

For yearly subscribers to Amazon Prime, several of Amazon's options for media and past Kindle users will find this phone to be right up their alley.

One of the most common complaints about the new Fire Phone is the lack of several Android apps that users once had on other Android phones and tablets. Since this is a first generation phone and was just released recently, and perhaps because Amazon does not want to offer all of Google's Android apps, the Amazon App Store is missing several apps like YouTube, Gmail, Chrome and other widely used apps.

As was mentioned earlier, the Fire Phone is really designed for the user to consume media on the device. However, when streaming video, users have pointed out that the battery dies very quickly. Another concern of current users is the heat that the battery gives off when streaming videos, TV shows or music. Several users have complained that the phone was almost too hot to touch.

Hand gestures made by the user should be able to operate certain aspects of the Fire Phone, but some reviewers say this feature falls flat and doesn't work all the time. To be fair, this problem could be chalked up to user error; however, this is a commonly held complaint from new Fire Phone users. Swiping over the screen and flicking your wrist while holding the phone are supposed to help a user navigate back to the home page of the phone, but many found this impossible.

Should You Buy a Fire Phone?

The Fire Phone has a lot of potential, but unless you are an avid Amazon user and shopper, you may want to wait until they work out some of the kinks in the later generations, and offer more widely-used apps than they currently have available now.

If you're looking for something a little more interesting and challenging to operate than an iPhone, this could be a good option. According to current users, operating the device isn't intuitive, and takes some time to get used to.

Experts believe the phone will be at least $150 or so more expensive than the US version, so if you are interested in the phone, keep that in mind. Although there is no determined release date as of this publication, I expect it will be released sometime in October, or at least before the holiday season.