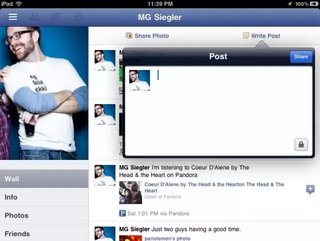 Although the iPad tablet has been available for well over a year, social media behemoth Facebook has yet to create an app for the platform—until now.

It was reported over the weekend that TechCrunch’sMG Sielger was examining hidden codes on the most recent Facebook iPhone app and discovered what he believes to be Facebook’s iPad app. Though Facebook has not yet revealed a launch date for the app, the company has not denied its existence.

“Yes, it’s real, and it’s spectacular (well, very good, at the very least). And yes, it really is right there within the code. Even better, it’s executable,” Sielger writes on his blog. It’s written in HTML5, and also boasts a great navigation system.

“Unlike the iPhone app — which even its creator is complaining about now as being stale — the Facebook iPad app uses a left-side menu system that can be accessed by the touch of a button or the flick of the iPad screen. The app also makes great use of the pop-overs (overlay menus) found in other iPad apps. When you flip the iPad horizontally, the list of your online friends appears and you can chat with them as you do other things on Facebook. The photo-viewer aspect looks great — similar to the iPad’s own native Photos app. Places exists with a nice big map to show you all your friends around you,” Sielger reports.

Seilger was able to get into the new iPad app because of a minor update on the Facebook iPhone app. He says, “Version 3.4.4 seemed like a small version that restored the “Send” button for comments and chat among a few other little things. Facebook may have even pushed it out in response to some backlash they had been getting about the app, as Financial Times covered a few days  ago."

Right now, the iPad app for Facebook is not yet available—unless you get into the backend of your iPad and start messing around with code. Sielger does not recommend it!