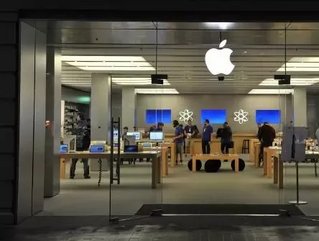 Apple’s slow growth rate, as evidenced by its overnight 12 per cent stock value drop that put ExxonMobil back on top as the most valuable US company, has analysts asking the big question: what’s next for the innovative tech giant?

For years, Apple has dominated the electronics market with the iPod, iPad and iPhone, but its competitors – Google, Amazon and Samsung – are no longer trailing far behind. Add that to the lower profit margin generated from Apple’s new devices such as the iPad mini and manufacturing issues causing mass production delays and it’s no wonder that “once euphoric investors have become nervous.”

However, if you ask Chief Executive Tim Cook what the future holds for Apple, he’ll speak positively about the company’s current situation:

“Apple is in one of the most prolific periods of innovation in its history,” Mr Cook told the Washington Post.

“We rely on the same spirit and drive that brought the original Mac and other revolutionary products like the iPod, iPhone and the iPad into the world.”

That spirit is reportedly driving the company’s sales in China, which have grown 60 per cent over the past year. China, Mr Cook said, is slated to become Apple’s top market.

Securing a deal with the country’s top mobile carrier, China Mobile Limited, is crucial to Apple’s growth, as well as developing a cheaper iPhone that more lower-income urban residents would be able to afford.

According to a Forbes article published in the December 10, 2012 issue, China, where about 10 per cent of residents currently own a smartphone, is expected to become the world’s top smartphone market by the year’s end:

China has become Apple’s second-largest market after the U.S., thanks to insatiable demand from a growing and brand-conscious middle class. Sales in China jumped 78% to US$23.8 billion and accounted for some 15% of Apple’s revenue in the fiscal year ended in September. That’s up from US$13 billion in 2011 and a mere US$3 billion the year before.

“We continue to see it as an extremely exciting market with more and more people wanting Apple products,” Mr Cook told Forbes.