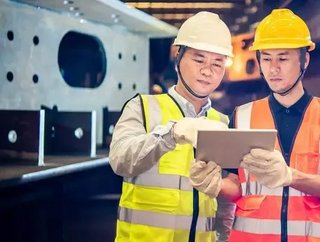 The largest workforce on the planet can be successfully reskilled for a post-industrial economy states a new McKinsey Global Institute report...

With China’s economy undergoing rapid change, increasingly driven by services and innovation and becoming ever more digitised and automated, some 30 per cent of the country’s workforce may need to retrain and change jobs by 2030. That’s according to a new report released in January 2021 by the McKinsey Global Institute (MGI).

The report, entitled Reskilling China: Transforming the World’s Largest Taskforce Into Lifelong Learners , argues how China, which has the world’s largest workforce of 220 million workers, will need to transform its system of education and skills development to deliver the talent that is needed for “an innovative, digitised, post-industrial economy”.

In the last 30 years, China has achieved tenfold growth in incomes and labour productivity and a 13 x increase in GDP. However, with the country transitioning from being led by investment and manufacturing to being driven by consumption, services, and innovation, and with the global rise in automation and digitisation, rapidly accelerated by the pandemic, China must transform its education and skill-development system if is to “sustain its continuing increases in per capital GDP and wages”.

This poses particular challenges for China, which has an education system built on serving the industrial economy, and whose “rural-urban migrants, who numbered 291 million in 2019, especially as 22-40 per cent of their work is susceptible to automation”.

China must embrace Everyone, Everything and Everywhere 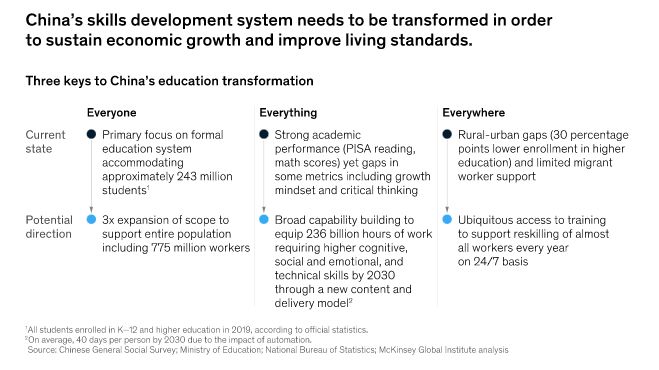 With such a transformation on the scale needed such a huge undertaking, the report suggests establishing best practice in China in smaller-scale pilots before scaling up to national level, and following a survey of best practice in China and worldwide, highlights four levers that China could use to kick-start such changes and that could lead to significant impact on education and skills development by 2030.