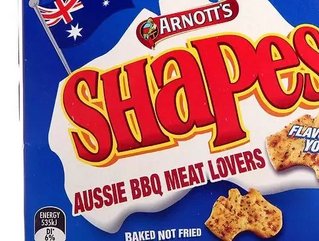 This week, national pride will hit its yearly peak as preparations commence for Australia Day: firing up the barbecue, putting on some summer tunes, and... munching on Australia-shaped biscuits?

The Sydney Morning Herald reported this morning that several Australian products have ‘Aussified’ themselves in celebration of Australia’s discovery by the First Fleet: MasterFoods is offering “limited edition” blue bottles of tomato sauce, and Arnott’s has Australia-shaped Shapes biscuits they’ve named “Aussie BBQ meat lovers.” (The latter is currently a sore subject for Tasmanians, whose state is not included in the box.)

Vegemite kicked off the holiday product branding parade earlier this month by introducing its limited edition jars of ‘Australia Day’ spread featuring the continent in place of the usual diamond emblem and the name ‘Australia.’ The iconic spread, which will also feature ‘everyday Aussies’ on its renamed jars, is celebrating its 89th birthday this year.

“Changing Vegemite’s name to Australia for a limited time in the lead up to Australia Day is our way of showing some contemporary Australian pride,” Jenny Nolch, marketing director for Vegemite, told the Daily Telegraph.

How far will Australian retailers take this holiday branding strategy? Will we have Australia and New Zealand-shaped Anzac biscuits come April? It seems anything is possible.