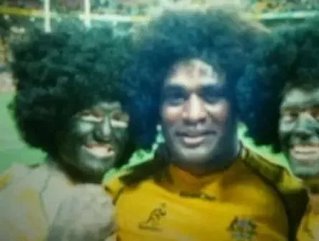 Qantas is the latest corporation that’s caught flack for its most recent social media initiative, and the lesson learned is to put a bit more thought into your strategy before firing out Tweets.

In a recent Twitter competition, Qantas gave two diehard Wallaby fans platinum tickets to the Tri-Nations decider for showing up to the game Saturday night at Brisbane’s Suncorp Stadium dressed as their favourite player. What Qantas didn’t realize is that the rugby fans would come dressed as Radike Samo complete with large afro-like wigs, gold and green uniforms and painted black faces.

It seems that many in the Twitter-verse immediately caught wind of the black facepainted Radike wannabes when Qantas posted their photo, and many of them weren’t pleased. Qantas, already battling a tarnished image this year, immediately issued apologies and took down the image from the company website with accusations of it the photo being  “appalling.”

Qantas quickly removed the photo and apologised to its followers Sunday morning. “We understand it caused offense to some people, which is why it was removed. We are really sorry if it has upset anyone,” Qantas’ official Twitter page read. A second Tweet said, “We are apologising to those who found it offensive, obviously it was not our intention. Just meant to show their support of Radike.”

This is a classic example of why a sound social media strategy needs to be put into place. This obviously brought Qantas more publicity, but at what cost? The first problem is that the airline offered free tickets to Tweeters before they even won a competition. All the fans had to do was show up to the stadium for their free tickets. The second was proceeding with posting the photo without Samo Radike’s permission, who luckily was okay with the situation. “I don't know what all the fuss is about. These guys were actually paying me a tribute. It was a bit of fun and I think it was great they regard me as their favourite Wallaby. I didn't have an issue with it at all. I was glad to be in a photo with them, so I don't know why anyone is getting worked up - that sort of reaction is just silly."

Still, a corporation like Qantas should know better and have a solid social media strategy in place to avoid the kneejerk reactions of the Twitterverse.