Miranda Kerr takes to the skies 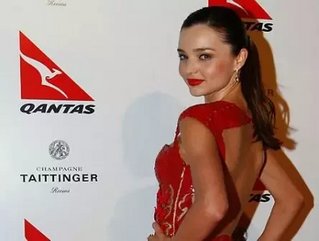 Qantas is saving face by appointing a beautiful one to represent its brand.

Miranda Kerr, a David Jones ambassador and Victoria’s Secret supermodel, has signed on to help the airline boost its tarnished image after a rather ruthless 2011.

“I fly with Qantas all time and it feels right," Kerr told the Sydney Morning Herald. The newspaper reported that Kerr had been originally approached by Virgin, but her busy schedule caused too many conflicts and a deal never materialised.

Kerr’s activism in eco-friendly projects such as Earth Hour and her skincare line Kora Organics has some questioning her decision to represent an airline.

“One of the first questions I asked was how do you help out with the environment and I was impressed with how good they are with their fuel efficiency, carbon footprint offsets, recycling water and they are always improving," Kerr told the SMH. "It's something I feel very strongly about."

The Sydneysider, who was honoured last night at a G’Day USA event in Los Angeles, is thrilled to join her ‘home’ airline.

"I grew up with Qantas which is such an iconic Australian brand. I’m proud of my Australian heritage and I’m so excited that I will now be able to represent Australia’s premium airline around the world," News.com.au reported.