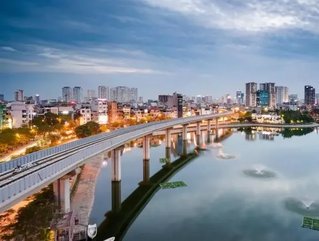 With a population approaching 8mn, a strong but stable level of growth and policies that promote business and infrastructure, Hanoi is becoming the next hot international business centre.

As a strong contender in the world's 20 largest cities, Hanoi's growing technology industry, solid marriage of innovation and development and range of business opportunities make it a great place to base a business. As one of Vietnam's best-kept secrets, Hanoi's metropolitan area is projected to have a population topping 15mn by 2020, with many highly-skilled citizens seeking employment.

Hanoi has seen constant growth approaching 8.8%, with significant investment in skyscrapers, business centres and infrastructure to support this growth. Partially responsible for this growth is the regular reform of administrative measures, improvements for investment opportunities, and development of government policies to help struggling entrepreneurs.

Easygoing city life
What can you expect in a city that is over 1,000 years old? An interesting mix of tradition, culture and new technology. One of the biggest draws for business and IT professionals to Hanoi is its low cost of living. A resident can grab a pint at the corner bar for under $1 USD, an inexpensive meal for under $2 USD, and pay utilities, including broadband internet, for about $60 USD for an 85 square meter apartment. Yet at the same time, the city has the highest Human Development Index in Vietnam, which looks at income, life expectancy and education.

To get a better feel for the local vibe, Hanoi's Old Quarter has examples of traditional architecture, beautiful lakes abound in the region and its many museums and French colonial structures have given the city the moniker of "Paris of the East". Over the past five years, it's been consistently among the top 10 travel destinations worldwide. Shopping, art, cuisine and the theatre are all just a short cab or bike ride away, as are a number of art galleries that have sprung up around the city.

Change in the weather
Recently, up to three-quarters of the population of Hanoi were employed in state-owned industries, with an additional 9% in collectively-owned enterprises and another 13.3% in private enterprise. However, this balance is quickly shifting as the government is downsizing and private enterprise growing.

The city has been experiencing a strong boom in industrial production and exported goods to other countries, with these two facets of the economy contributing significantly to the national GDP and experiencing growth of 10-20% annually on average. The city's eight industrial parks are being supplemented by an additional five large-scale parks and 16 small and medium industrial clusters.

Following inconsistent growth in the 1980s and 1990s, Vietnam has invested heavily in the development of its infrastructure, industry, and technology. Combined with Hanoi's regional focus on growth, planning, and real estate development, this has created a unique environment where professionals can enjoy the combination of a lower cost of living and exceptional business and investment opportunities. However, with the expected growth over the next few years, smart investors will look at real estate sooner rather than later to enjoy the best return on investment.

FPT Group
As one of Vietnam's largest IT service companies, FPT is the third-largest business in the country and has ties to Intel and Microsoft.

It has a presence in over 20 countries worldwide, including eight subsidiaries and two associates. Its focus on software development, system integration and IT services gives it a solid base for future growth through digitisation and disruption in the market. Its position places it at the top for IT services and in the second position for broadband services in Vietnam, and it's rated as a top-100 global service provider by the association IAOP.

Tech is on the up in Hanoi
The FPT Group isn't the only flourishing telecom business in Hanoi; in fact, the city is considered by many to have a better tech industry than the more populous Ho Chi Minh City. Appota Corporation is a mobile app development company focused on games, advertisement, and payments, which has gone through three separate successful funding rounds. Gmobile provides mobile network services in the top five service providers, including Hanoi-based Viettel, Vietnam's state-owned telecom that is the largest in the country.

Hanoi's business scene
Transportation in and around Hanoi is fairly simple and doesn't require much driving. The low cost of living means it's very inexpensive to hop on a bus or take a taxi wherever you need to go within the city, with a metro rail system currently under construction. A novel option for getting around troublesome traffic jams is the "xe ôm", or hug bike, grabbing a quick ride from a local motorcyclist. When it's time to visit other cities, the new international terminal is only 15 km north of the city, and the Vietnam Railways system makes short jaunts easier.

Hanoi has a wide range of hotels to make business travel or long-term business stays more comfortable. The city's many delights wait to be discovered by curious professionals who are eager to experience all that Hanoi has to offer.