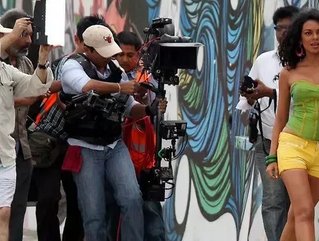 Bollywood has a huge influence on where Indians travel, and the influence of the movies is massive, said Carl Mah, an India tour specialist in Melbourne.

“Bollywood is bigger than Hollywood and people want to go to the places they see in the movies,” Mah said.

Bollywood is an excellent way to market a particular destination to a large market like India, a hopeful market for Tourism Australia. More than 30 million potential tourists from India will be exposed to a destination featured in a Bollywood film. This is already occurring in Australia, which was previously used as a location for Bollywood cinema.

“It shouldn't be seen as a big surprise that more and more tourism bodies are turning to Bollywood films as part of their marketing approach," McEvoy said.

"From Sydney...With Love" is a recent Bollywood production being filmed in Australia. Scenes for this production have been shot at popular tourist attractions like the Opera House, Darling Harbour and the Kings Cross Fountain. These scenes, plus Sydney in the title, have Tourism Australia excited for the film.

''There will be 2 million posters and up to 10,000 billboards for it in India and producers estimate at least half a billion people will read the positive title with the word 'Sydney,’'' Sharma said. ''A quarter of a billion people will watch the film, counting its cinema screening, pay TV release and years on the DVD market.”