Bing it, Australia! The Beta mode is gone. 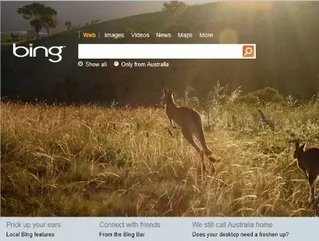 “Bing” goes the Beta! After more than two years, Microsoft’s search engine Bing for Australia is coming out of Beta mode.

“In 2009 we launched under Beta, a tag we promised to remove only once the Bing experience could truly satisfy Australia’s search expectations,” said Alex Parsons, NineMSN's Managing Director of Audience. “On 15 November 2011, after more than two years of testing, product feature rollouts, investment and partnership integrations, Bing Australia is now ready to take on the Australian search market.”

More than 1,000 Australian attractions are covered in the available Bing attraction feature and more than 1.25 million Australian local business listings in Bing local. Despite dropping the Beta, full range of services will not be available until 2012, according to The Australian Financial Report.

Bing has a market share of 7 per cent, miniscule compared to Google’s 88 per cent revenue market share in the local search advertising market, according to the latest Nielsen NetRatings. This doesn’t faze Bing’s global senior director Stefan Weitz.

“Looking at revenue numbers and asking if we’re able to attract people who want to advertise on our system is a better way to look at it,” Weitz said.

Bing made a deal with Yahoo! to power the search of Yahoo!7′s searches in Australia. Other partnerships include Australian syndicated content provider HWW, Navteq/Nokia, Sensis and Australian photographers for local Bing homepage images.

Almost 3 million Australians use Bing search engine every month. This is 20 per cent of active online Australians. Local Bing users are also increasing. Traffic increased more than 65 per cent from June 2009 to September 2011.

It may be awhile before people start saying “Bing” it, but at least Australians can enjoy spectacular images right on their homepage.