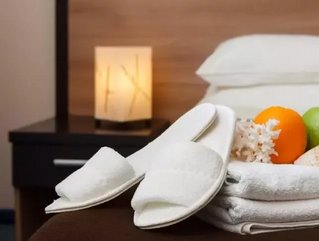 A Japanese inn is making use of automated technology to offer self-driving slippers.

Nissan Motor Corp has developed slippers which can “park” themselves at the entrance of the Inn, ready for guests to use on arrival when they take off their shoes.

The slippers have small wheels, a motor and sensors to drive them across the Inn’s wooden floors. They use the ProPilot Park Technology which is used in Nissan’s Leaf battery car, coupled with high tech cameras and sensors to allow the electric car to park by itself.

A simplified version of the tech has been implemented at the high-end, traditional Japanese Ryokan inn in the resort town of Hakoke which is a tourism hotspot known for its views of Mount Fuji.

The system is said to bring together traditional furnishings with the latest technology to maximise guest experience.

Indeed, the inn also features floor cushions and low tables that can drive into place automatically.

Ryokan is not the only hotel to take advantage of autonomous technology: M Social Singapore won two international awards late last year for its room service robot, AURA, which delivers items automatically to guests rooms and was praised for “addressing with innovation the serious manpower shortage in the hospitality sector”.

Is hospitality on the rise?

The move also points to an increasingly competitive hospitality market as tourism in Japan is on the rise, both in tourist numbers and dollars, suggesting foreign travellers are willing to go for more luxury experiences as they continue to bring more and more money into the country.

It has recently been found that due to a weaker yen, slightly relaxed visa restrictions and marketing campaigns, 2017 was the fifth year in a row that both arrivals and spending increased in Japan’s tourism sector.

In 2017, nearly 29mn visitors came to Japan according to the Asia Times, contributing $36bn to Japan’s GDP, in an economy now worth $5trn in total.

It is predicted that by 2020, Japan will be a destination for over 40mn tourists annually, and this is projected to a figure of 60mn by 2030.

However, it’s likely more innovations and change such as Nissan’s technology will be needed, as the Asia Times stated the tourism boom has highlighted several weak spots in the industry, including a lack of tourism infrastructure such as modernised airports and wifi provision, few skilled English speakers, and a lack of non-smoking areas. This leaves huge opportunities for businesses to gain a slice of the growing industry.