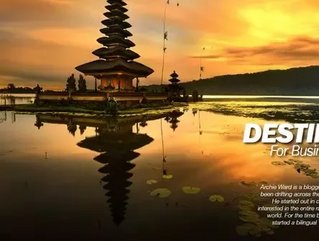 As a gateway to the cheap materials and labour in mainland China, Hong Kong has acted as a buffer between the tricky politics of China and the rest of the world. Despite its strong Cantonese flavour, the impact of British colonialism has left a legacy of ‘East meets West’ that still lingers within Hong Kong’s culture.

For Aussies visiting Hong Kong on business, it is a relief to know they will issue you  a 90-day pass on arrival, no visa needed.

2. Singapore: Also falling into the ‘low tax’ category is Singapore. With no embellishment, Singapore truly is the fastest-growing economy in the world, with growth rates usually around the 17 per cent mark per year.

The big business in Singapore is banking. And business is good. Singapore is the financial hub of Southeast Asia. With the secrecy abilities of Swiss bank accounts diminishing, many major account holders have jumped ship to Singapore. Even Credit Suisse, Switzerland’s second biggest bank, has relocated their head of international banking to Singapore.

Right in the centre of it all for Southeast Asia and as the other ASEAN countries develop and transitions into new world economies, one can only expect Singapore to continue growing.

3. Japan: If we’re talking about economics on a global scale, then Japan is trailing USA and China at third position, in terms of size.

Completely crushing all competitors in the electronics field, perhaps Japan’s main claim to fame is its electronics industry. Also of note is their position as the world’s third largest producer of automobiles. For Australians, trying to maintain relations with Japan is of great importance, as the ‘Land of the Rising Sun’ is Australia’s second largest trading partner.

Although it was overtaken by China in 2010, in terms of sheer economic size, Japan remains one of Asia’s (and the world’s) key economies.

4. South Korea: Where Japan is slowing down, South Korea is there to pick up the slack.

Electronics? South Korea is booming in that sector. Automotive? Hyundai, as well as other manufacturers, are absolutely killing it worldwide, making South Korea the fifth largest producer on a global scale. Anything cutting edge in the tech world is likely to come from South Korea.

South Korea is also showing an increasingly more vital role in the international economic community, boasting membership to APEC, OECD, the WTO and the G20.

Any Australian visiting China on business would do well to prearrange an APEC card, which allows visa-free entry and less queuing at immigration.

6. Vietnam: This once over-regulated economy has cast of its shackles to come into line with the global economy.

According to a report by PricewaterhouseCoopers, Vietnam is among the fastest growing of the world’s emerging economies. Famed for its rice, Vietnam has become one of the biggest agricultural exporters in Asia: its rice and other produce can be found all over Asia and the rest of the world.

Expect Vietnam to get a boost in the manufacturing sector once labour becomes too expensive in China, as many of the jobs could end up in this socialist state which is increasingly opening up to the rest of the world.

7. Malaysia: This country in Southeast Asia is the world’s largest Islamic banking and financial centre – a title to consider when nearly one in four people in the world are Muslim and they require financial products tailored to their way of life.

After the 1997 Asian financial crisis, Malaysia was one of the first countries to bounce back – a testament to the stability of their economy. Malaysia’s business culture reflects its mixture of Malay, Chinese and Indian customs, so there are a few things you should know about doing business in Malaysia:

Australians visiting Malaysia should have no issues entering the country, with a 90-day visa free period upon arrival. An APEC card does ensure quicker processing through immigration, however.

8. Indonesia: The largest economy in Southeast Asia and Australia’s biggest neighbour, Indonesia is one country you should keep your eye on.

Not far behind China and India, Indonesia is the third-fastest growing economy in the G20. Although Australia and Indonesia are not major trading partners, it’s important to note that about 60 per cent of Australian exports pass through Indonesian waters on their way to the rest of the world.

One achievement shared by Australia and Indonesia was weathering the GFC better than the rest of the world, coming out largely unscathed. It may also be of interest to see how the ASEAN-Australia-New Zealand Free Trade Agreementcan benefit businesses wanting to trade with Indonesia.

9. Thailand: This country was left in tatters following the Asian economic crisis of 1997, but they’ve bounced back to become the second largest economy in their region.

Traditionally, Thailand’s trading partners have been wealthy countries such as USA, Japan and those in Europe. But the nation has found further economic success by also strengthening ties within its own region: by opening its doors to the rest of Asia Pacific, the country has bolstered its reputation as a major exporter.

The free-trade agreement allows for easy work permit obtainment, reduced paperwork and simple extensions of stay in the country.

The nation has even taken over the top spot in call centres, employing more workers in this growing industry than India.

Archie Ward is a blogger, traveller and digital marketer who has been drifting across the Asian continent for the last 18 months. He started out in copy writing, but soon found that he was interested in the entire range of marketing services for the online world. For the time being, he's in Southern Thailand and has started a bilingual Thailand SEO company, Andaman SEO.