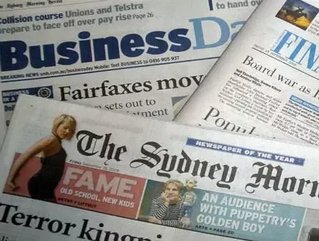 Fairfax Media Ltd announced plans to cut 1,900 jobs – just over a fifth of its workforce – in addition to implementing paywalls around its websites and shrinking two of its flagship newspapers to tabloid size to create AU$235 million in annual savings by June 2015.

Just as the Times of London and the New York Times have been forced to do, The Sydney Morning Herald and Melbourne’s The Age will shrink from broadsheets to tabloid size by March 2013. Online access will incur a fee beginning in the first quarter of next year, Bloomberg reported.

According to the Sydney Morning Herald’s Adele Ferguson, the Canberra Times will also reduce its size.

Job cuts will be spread over the next three years, and printing plants in Chullora and Tullamarine are slated to close by June 2014.

Fairfax will also reduce its stake in Wellington-based online auction business Trade Me Group Ltd from 66 per cent to 51 per cent, resulting in an AU$160 million savings.

Gina Rinehart, the world’s wealthiest woman and a significant shareholder in Fairfax, has reportedly increased her ownership in the media company to 18.67 per cent – a move that Ms Ferguson says “may help to consolidate [the] gains” seen recently on the trading floor when Fairfax’s share price jumped almost 10 per cent.

"We are taking decisive actions to fundamentally change the way we do business," said Fairfax CEO Greg Hywood in Monday’s announcement. "The changes announced today have been selected after considering the merits of a full range of structural alternatives, including a demerger.

“The days of the huge printing plants, built for our legacy print classified business, are well and truly over.”