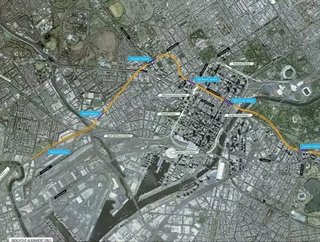 Melbourne’s highly-anticipated $11bn metro infrastructure project has reached a major milestone after $6bn of tunnelling and station building contracts were awarded to a consortium of companies.

The Cross Yarra Partnership, consisting of Leandlease, John Holland, Capella Capital and Bouygues, will deliver the largest chunk of the work on what is the city’s most significant transport project of all time.

Craig Laslett, Lendlease CEO Engineering and Services, said: “A world-class project of this scale will create unprecedented opportunities for local employment and procurement, and we look forward to working with government, project stakeholders and the community to bring this project to life.”

Maintenance is also included in the deal, which is set to last for around 25 years. Early works on the project have already begun, with the new system set to open in 2026.

Up to six tunnel boring machines (TBMs) are set to be used during construction, each up to 100m long and weighing more than 1,000 tonnes.

In preparation for this significant work, three shafts will be excavated in the CBD – at Franklin Street and A'Beckett Street near Melbourne Central station, and at City Square near Flinders Street Station.

The shafts will be up to 11 storeys deep and will enable the roadheaders to be lowered into the ground to begin excavating around 2mn cubic metres of soil and rock – enough to fill 800 Olympic-sized swimming pools.

The final contract has also been signed with CPB Contractors and Bombardier Transportation to start work on the roll-out of high-capacity signalling on the Metro Tunnel. The $1.1bn Rail Systems Alliance will allow trains to safely run closer together, meaning they can run more often – creating a turn-up-and-go train network for Melbourne.