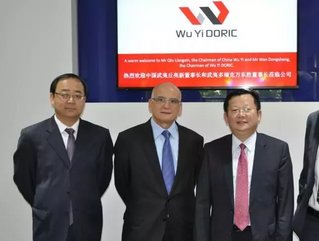 The new company, named Wu Yi DORIC, is formed as a 50-50 joint venture, and promises to create more jobs for Australians and suppliers to the construction trade.

Doric Group CEO Vince Mulholland said: “Doric’s strategy was to look for a major partner so that it could move to establishing itself as a tier one contractor, to be able to deliver major projects and go national.

“We have developed a long-term relationship with China Wu Yi and formed Wu Yi DORIC. It was really a coming together of two strategies, from two different companies to form a major contractor that could deliver major projects initially in WA, then nationally and then in South-East Asia.”

Wu Yi is based in Fuzhou and has been listed on the Shenzhen Stock Exchange since 1997, and by the US Engineering News-Record as one of the Top 250 International Contractors since 1994.

The new JV is already in negotiations for its first major project and hopes to make a positive announcement in the near future.

Wu Yi Australia Director Kobe Chen commented: “We feel Doric is a very good partner in terms of this experience. With the combined capacity of the two companies we can achieve something bigger.

“We aim to help the construction industry grow with the introduction of new technology that has already shown impressive results internationally. Innovative technology can help with speed of construction as well as reduce costs.”