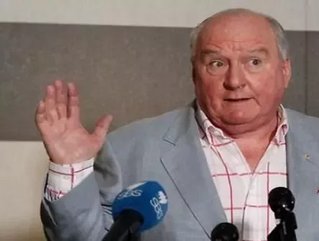 Radio broadcaster Alan Jones’ weekly breakfast show will run without advertising, a decision reached by 2GB as numerous sponsors continue to cancel their promotions – costing the station $80,000 a day – in light of the recent controversy surrounding Jones’ name.

2GB, the station on which Jones broadcasts, has reportedly pulled all advertising from the program in an effort to protect these businesses from the “cyber bullying” campaign launched as a result of Jones’ proclamation that Prime Minister Julia Gillard’s father had “died of shame” over her “lies” two weeks ago.

"The nature, tone and volume of the reaction to Jones's remarks, and in particular the threats being made through social media to companies advertising on Jones's program and the disruption being caused to their businesses, have made it necessary for MRN [Macquarie Radio Network] to call 'time out',” said Macquarie executive chairman Russell Tate to Perth Now.

Online petitions and Facebook groups calling for Jones’ sacking have been popping up and gaining thousands of online supporters. Many small businesses have reportedly been threatened to pull their support from the program as well.

The most prominent advertiser to pull out has been Mercedes-Benz, who not only ceased their advertising with 2GB, but also repossessed Jones’ $250,000 sponsored sedan. Arriving to work this morning in a silver Lexus, Jones has reportedly lashed out at Mercedes-Benz corporate communications manager David McCarthy for the company’s actions, calling him a ‘gutless wonder.’

Twenty-two year old Sydney student Nic Lochner, who started the Change.org petition “2GB and Advertisers: Immediately cease association with Alan Joes over ‘died of shame’ comment,” has called the decision to cut advertising from the breakfast show “a ploy to short-circuit the controversy.”

"They don’t address the two issues at play here - that Alan Jones is a serial offender when it comes to hate speech, and that the response from the Australian public has been a genuine groundswell of disgust to this appalling kind of behavior,” said Lochner.

"This is not about cyber-bullying. It is about customers exercising their right to call companies to account about the kind of behaviour they want to see in Australian society.

"This campaign has been about calling for civility and decency in public debate and we have gone to great strides to ensure that discourse is conducted appropriately.”

Advertising did eventually return to the radio broadcast – some even returned only to pull out once again – but not before the Macquarie Radio Network was hit with "somewhere between $1 million and $1.5 million" in lost profits.