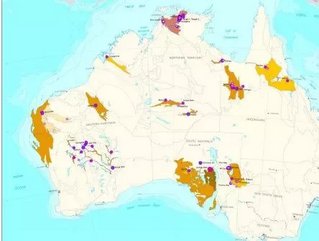 Despite the move to sell shares in the uranium prospect, Atlas Iron Ltd has stressed that it is committed to iron ore expansion plans, in an attempt to appease fears.

“We're not a distressed seller in any possible sales but we have discussions underway with potential parties who are predominantly end user or trading groups.”

Atlas acquired its share in the uranium project, one of its only mine ventures outside Western Australia, when it took over Giralia Resources in 2011. The project isn't identified by the company on its website as part of its expansion plans, which focus on its Mt. Dove, Abydos and Mt. Webber mines, and five others in the Pilbara WA, in addition to its existing Wodinga and Pardoo operations.

"It's still business as usual, we're aiming to produce 12 million tons by the end of calendar 2013," said Mr. Hancock in an interview on the sidelines of the Bank of America Merrill Lynch Australian Investment Conference in New York. The company's Mt. Dove and Abydos mines in Australia will collectively account for 10 million tons of annual production and Mt. Webber is expected to contribute the rest.

"We'll keep an eye on trends and won't ignore what's going on around us, but we think the current projects we're putting in place still make sense to push on with," said Mr. Hancock, adding that Atlas's smaller-scale investments can be sped up or slowed down on a case-by-case basis if required.

The price of iron ore has fallen sharply in recent months as Chinese steel mills have run down inventories of the raw material. The commodity's price fell to its lowest price since October 2009 Wednesday, at US$86.70 a dry metric ton. It trades down almost 40% year-to-date.

"Any price below $100 feels difficult to me and I expect to see it back above that in the fairly near term," said Mr. Hancock. "There hasn't been a Fukushima-type event that makes you think it's going to make it hard for the sector," Mr. Hancock said, adding that certainty over the Chinese political situation and early views from leaders would be a catalyst for a lift in the iron ore price. China is due to change its leadership in October.

But Mr. Hancock concedes that if demand from Chinese steel mills doesn't rebound near-term then Atlas will be forced to tap debt markets if it's to maintain current spending plans. Beijing has accelerated plans for new infrastructure projects by local governments, a move that could boost steel demand, part of a range of measure to jump-start growth, which slowed to a more-than-three-year-low of 7.6% in the second quarter. China is Australia's largest customer for iron ore.

"We'd certainly look to supplement cash flows with debt facilities, it's a prudent back up to have if pricing stays low," Mr. Hancock said. He added lenders weren't using the current iron ore price to assess a company's creditworthiness. "It's slightly more challenging but we believe that over time, we will be able to establish facilities that will give us additional flexibility," he said, adding that Atlas is not planning a capital raising in the near-term, describing the action as unattractive at current share price levels.