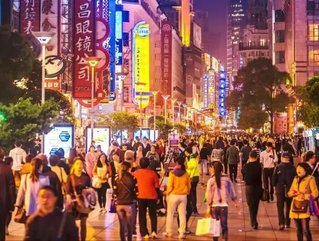 Taylor Swift headlined the Alibaba Group’s record-breaking Singles’ Day launch event at Shanghai’s Mercedes-Benz arena, kicking off the yearly 24-hour shopping spree that has come to dominate Chinese consumer commerce. Swift follows the likes of Mariah Carey and Nicole Kidman in promoting what has become the world’s biggest shopping festival in only 10 years - an unofficial national holiday dedicated to shopping.

Considered to be the world’s biggest recording artist, Swift’s presence is reflective of the new internationalism of a festival which now includes twenty-two thousand brands from eighty countries, and which last year saw over $30bn of discounted merchandise sold in 24 hours.

The event is akin to Black Friday and Cyber Monday in the US but is nearly three times the size of the two combined. This year has been another huge year of sales and spending, despite the Chinese trade war with the US and a slowing growth in Chinese GDP.

The immediate draw for international brands is of course the scale of the festival. In 2018, Black Friday sales were $6.2bn, Cyber Monday’s $7.9bn and Amazon Prime Day’s $4.2bn. These are dwarfed by the $30.8bn spent on Alibaba’s Singles’ Day last year, up 24% on the previous year.

However, perhaps the more significant opportunity here for Western brands is understanding the mechanics of Singles’ Day, the motivations spurring on its consumers, and the platform itself, which provides invaluable insights into how to succeed in the retail business in China.

The continuing rise of experience

Discounts will always be important, though brands are moving away from seeing the festival as a race to the bottom. Instead, experience is becoming widely seen as one of the keys to the festival’s success. This is expressed through the emphasis on celebrity endorsement that pervades the festival and is carried through to the structure of the platform itself, which is heavily ‘gamified’ and encourages interaction across the platform. This includes ‘red pocket’ collecting through the ‘Miaow’ game (Alibaba itself subsidises circa $2bn of discounts through the platform and the icon of its consumer facing ‘mall’ is a cat) and the various interfaces that encourage content sharing, social commerce and live video streaming from key opinion leaders (KOLs).

The importance of sociability

The endorsement and trust that comes from the opinions of peers, celebrities and KOLs in China has revolutionised online commerce. Chinese consumers spend on average 44% of their time on social media applications, with 11% of their time spent watching, sharing, and creating short videos on apps such as Douyin (known as TikTok outside of China). Video-driven e-commerce has been around since 2016 when e-commerce platforms Mogujie and Taobao began hosting livestreaming sessions on their platforms. In recent years the format has taken off, with billions of dollars of livestreaming transactions occurring through Taobao in 2018 alone.

Consumer trust in platforms and technology

The importance of ‘local trust’ goes beyond recommendations from friends and influencers and extends to the platforms themselves: China skipped out on the infrastructure of local high streets and credit card payments and went straight to digital.  The majority of Chinese middle class and millennial consumers, who represent the dominant buying force in China, ‘grew up’ with Alibaba and the Chinese home-grown platforms such as Wechat.

Of the 226mn new mobile monthly active users that joined Alibaba's marketplace, Taobao, over the last two years, 70 percent were from tier 3 and 4 cities. Whilst these remote cities may lack the physical infrastructure of larger cities, they were, and are, particularly well-suited to ecommerce and enabled, or were enabled by, the widespread take-up of mobile technology. In many ways, Alibaba (which shares a duopoly of consumer technological trust with its communication focused rival Tencent), has defined the consumer experience in China.

Integration of online and offline channels

In 2016, Alibaba Group co-founder Jack Ma coined the term ‘new retail’%u202Fto describe the seamless integration of online and offline channels, and this year 200,000 ‘smart stores’ in China %u202Fhave signed up for Singles’ Day to make discounts available to Alibaba customers.

Whilst surveys have shown that the younger generation of shoppers in Tier 1 and Tier 2 cities distinctly favour this trend, Chinese consumers ultimately are more comfortable committing to the final transaction online. This has led to physical bricks infrastructure in China becoming more experiential, with the widespread adoption of enabling in-store technologies such as virtual changing rooms, magic mirrors and interactive displays, providing a continuation of the online experience into the real world. Numerous Chinese and Western brands have started to invest in retail technologies to appeal to the millennial consumer base which is so key to the Chinese retail landscape.

The growing opportunity in luxury

Chinese consumers currently contribute circa 37% of the world’s spending on luxury goods, but only about 10% of the world’s spending on luxury happens physically in China. However, this is quickly changing: the Chinese government’s reduction in import duties and stricter controls over grey markets, combined with brands’ efforts to narrow the price gap with overseas markets have led more Chinese consumers to make their luxury purchases in China and within a few years it is expected that 50% of the world’s spending will happen in China itself. This is a huge shift and will change everything from the focus of luxury Brands, their eurocentrism, and how commerce happens in China.

To win in China, brands need to understand all of these nuances and the emotive drivers of the world's most powerful purchasing community so they can strengthen the connection between their brand purpose and everyday consumer experience within this exciting, but constantly shifting, market.