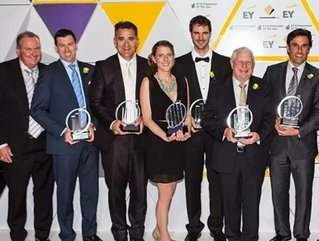 Ernst Young, the professional services firm headquartered in London, has announced their Australian regional winners of their illustrious Entrepreneur of the Year award. The program is held in more than 145 cities and over 60 countries worldwide. In Australia, 83 entrepreneurs from five different regions were considered for the award. Commonwealth Bank and Qantas sponsor the award.

Over the next few days, Business Review Australia will focus on each of these regions and provide an inside look at the winners, their companies and the passion that drives them.

Carnegie Wave Energy (ASX:CWE) develops and commercialises its 100 percent owned CETO wave energy technology. Capable of producing zero-emission power and direct desalinated water, the company has received grants for the development of their technology from the Australian Federal Government, the Western Australian Government, EDF EN, the French Government, DNCS and the Sustainable Energy authority of Ireland.

Michael Ottaviano is the CEO and managing director for Carnegie and the recipient of Ernst Young’s Entrepreneur of the Year award from Ernst Young.

“Innovation is where creativity and business butt up against each other, and that’s exactly where Carnegie is,” said Ottaviano in the video for the award. “That’s what really fuels my appetite and keeps me really excited about what I do. We’ve got a blend of the business and a blend of the creative.”

CETO technology converts the energy of the ocean swell into electricity. A buoy sits below the ocean surface and moves with waves. This constant motion is then converted into a pumping motion, delivering high pressured water through a hydraulic turbine to generate energy.

“The average person, given the choice, would love to be 100 percent powered by renewable energy,” said Ottaviano.

Congratulations to him and Carnegie Wave Energy on the award.

Other winners in the Western Region include: