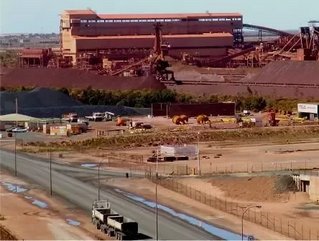 Following the tragic death of one of its contractors, BHP Billion has reopened its iron ore port and rail operations at the Finucane Island site in Port Hedland in Western Australia.

Work was suspended after 27 year-old Jordan Marriott-Statham, an employee of conveyor belt company Fenner Dunlop and contractor to BHP Billiton, was killed when the boom of a BoomLogistics crane fell on top of him.

The immediate area surrounding the accident was initially blocked off because of investigations by the Western Australia Mines Department and WA Police, on behalf of the coroner and BHP Billiton. “BHP Billiton is working closely with Fenner Dunlop, Boom Logistics, police and emergency services and the Department of Mines and Petroleum to investigate the incident and establish further details,” the company said. BHP says staff and the man's family have been offered counselling and other support.

Fenner Dunlop executive director, David Landgren said, “We express our deepest condolences to all members of Jordan's family, his friends and his colleagues at this extremely difficult time.”

The death was the seventh on BHP’s WA iron ore operations in the last five years.

BHP, who is the world’s number 3 iron ore miner, depends on Port Hedland to ship the important steelmaking component to countries like China and India. BHP exports around 155 million metric tons of iron ore annually from Port Hedland, more than a third of Australia's exports of the commodity. Port Hedland is the world's second-largest iron-ore port after the terminals at Sao Luis in Brazil.