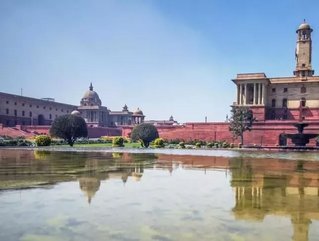 As India’s population continues to expand and a growing middle class leads to a strain in transport infrastructure, how will the nation’s capital rise to the challenge?

India’s capital city of New Delhi is best known for its dense and rapidly growing population, as well as being the centre of government for the second most populous country in the world.

The largest city in India by area, New Delhi, with its metro zone known as the National Capital Territory (NCT) is the fifth most densely populated city in the world. 2016 figures stand at an estimated 18.6mn. The NCT and its sprawling surroundings, including the neighbouring cities of Baghpat, Alwar, Sonepat, Guragon, Ghaziabad, Faridabad, Greater Noida and Noida, are known as the National Capital Region (NCR) which in total has a population of over 24mn.

The city of New Delhi is also one of the fastest growing in the world, having increased from a population of just 400,000 in 2001. Both birth rates and migration are playing a part in this continual increase, which is bound to put a strain on the infrastructure of the capital and its surroundings.

Despite recession and global ups and downs, infrastructure and in particular transport has continued to develop in the city, with much of this growth put down to foreign investment. New Delhi has a well-developed transportation network, with more than half of its citizens relying on local transport for business and pleasure. These include rural transport vehicles, the Delhi metro, buses, taxis and trains.

The ‘Delhi Master Plan 2021’, which focusses on responsible urbanisation, will involve major changes in the city’s infrastructure, with the aim of making Delhi ‘a global metropolis and a world-class city’. It aims to promote the right atmosphere and infrastructure for citizens to be more productive and enjoy a better quality of life in a sustainable environment.

Another way to get around in Delhi is by taking advantage of the hotly competitive ride-hailing market. India’s main ride-hailing platform is Ola, which was founded in Mumbai but has recently expanded as far afield as Australia and the UK. Ola currently has a network of approximately 600,000 vehicles across 110 cities, of which Delhi was one of the earliest adopters.

It’s not the only option, however, with Uber (the largest such business in the world) having doubled down on the Indian capital over the past year. In 2017, Uber reached the milestone of 1mn rides per day in India, with Uber India’s President Amit Jain noting: “We were focused on moving from a startup to a sustainable business in India. As a result, we recorded double-digit growth and continue to clock over a million trips a day.” One customer from New Delhi was the most frequent Uber rider ever, clocking up five daily journeys, while New Delhi is also home to India’s longest standing Uber driver partner, who has been with the firm for almost five years.

The Indira Gandhi International Airport is one of the busiest in India in terms of both passengers and cargo. Located just 16km from the city centre and 15km from New Delhi Railway Station, the airport is the 21st busiest in the world with over 63.5mn annual passengers. Terminal T3, which was opened in 2010, is one of the world’s largest airport terminals, boasting an annual capacity of 34mn passengers.

Top destinations from the airport include Mumbai, Bangalore, Kolkata, Pune, Hyderabad and Chennai, while the most popular international locations are Dubai, London, Bangkok, Kathmundu, Singapore and Abu Dhabi. Indeed, the Delhi-Mumbai passenger route is reported to be the third most-travelled passenger route in the world.

Run by a consortium led by the GMR Group, the airport is currently working towards a goal of carbon neutrality. It has implemented various initiatives to reduce emissions and improve air quality, including extensive planting of air purifying trees, and regularly having air quality monitored by different authorities. GMR Group has a significant CSR arm, the GMR Varalakshmi Foundation, which works on community projects spanning health, education and community development.

Already running at a high capacity, it will also be necessary for the Indira Ghandi airport to keep up with the pace at which the aviation market is currently expanding in India, thanks to a growing middle class with more disposable income.

According to IATA (International Air Transport Association), India has been the world’s fastest-growing domestic aviation market for three years (2015-17). By 2025, the Indian air travel market is set to be the third largest after the US and China, and is expected to cater to 487mn passengers by 2036.

For example, Mumbai airport recently broke the world record for the most flights handled by a single operating runway, with 969 flights passing through in 24 hours. 2018 has also seen Indian airline Jet Airways placing orders for 150 Boeing 737 MAX Aircraft and announcing the addition of 144 new weekly domestic flights, with New Delhi being one of its major hubs. Currently, penetration for the market is low, with around 97% of India’s 1.3bn population having never been on a plane.