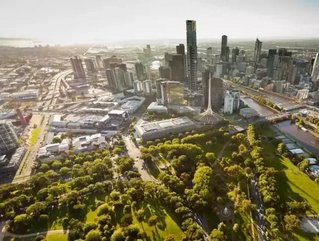 Capital of the south-eastern Australian state of Victoria, Melbourne sits on the shore of Port Phillip Bay, which flows out into the Bass Strait separating Australia proper from Tasmania. As of the last Australian census in 2016, the city had a population of 4,485,211, behind only Sydney in both Australia and Oceania at large. In 2017-18, SGS Economics & Planning said Melbourne’s GDP was $351bn, representing 19.3% of national GDP. Melbourne was also said to represent 82.7% of Victoria’s GDP. Although at the time of its founding its geography wasn’t conducive to shipping, 19th century engineering works made the city more accessible by sea. Nowadays, the Port of Melbourne describes itself as the largest container port in Australasia.

During its development, the city was influenced by the garden city movement, which was founded in the United Kingdom in 1898, advocating the consideration of greenbelts in city planning. Indeed, a suburb of the city is named Garden City in recognition of the movement, and Melbourne as a whole is renowned for its garden spaces, such as the Victorian era Melbourne Royal Botanic Gardens in the centre, south of the river Yarra, and Fitzroy Gardens near the Melbourne Central Business District in the east of the city. Outside of the city’s immediate environs the spirit still persists, with protected national parks on the coast such as Mornington Peninsula and Port Phillip Heads Marine National Park.

Australia’s largest telecommunications company, Telstra is headquartered in the Telstra Corporate Centre, one of the top 10 largest skyscrapers in the city. The company has its origins in the Postmaster-General’s department, a government organisation founded in 1901. In 1975, its telecommunications responsibilities were spun off into Telecom Australia, which was renamed Telstra in 1993. From 1997, the company was slowly privatised, completing its journey in 2011. Recently the company was the first to launch a 5G enabled device in Australia. Employing 32,000 people, the firm reported its revenue as being AU$26bn in 2017.

The recently renamed BHP is an Anglo-Australian dual-listed mining company, headquartered in London and Melbourne. Trading as BHP Billiton until 2018, they were formed in 2001 from the merger of Anglo-Dutch Billiton with the Australian Broken Hill Proprietary Company. In 2018, their employees and contractors totalled over 62,000 with revenue amounting to US$43.6bn. The company mines products such as aluminium, copper, uranium, and titanium, with operations in countries including Australia, Chile and Canada.

National Australia Bank (NAB) is generally regarded as the smallest of the big four Australian banks, alongside ANZ, Westpac and CBA. It was formed in 1982 via merger, and can trace its history back to the 1834 founding of one of its predecessors, the Commercial Banking Company of Sydney. Despite its name, it is not confined to the country and also serves New Zealand via its subsidiary, Bank of New Zealand. The company reported its 2018 revenue as being AU$19.1bn, and in 2016 they employed over 35,000 people.

As well as being a financial centre, Melbourne is also notable for its transportation links, via both sea and air. The former is served by the aforementioned Port of Melbourne, which processes over 7,200 containers daily. Annually, the port sees around 3000 ship visits, and features more than 30 berths, facilitating a total trade value of around AU$102bn. As for air links, the city is served by Melbourne Airport, which opened in 1970 to replace the nearby Essendon airport. More focused on passengers than cargo, the Bureau of Infrastructure, Transport and Regional Economics found it to be the second busiest in Australia after Sydney airport in 2015. Routesonline reported in 2018 that the route between the two airports was the second busiest in the world, carrying over 9mn passengers between the two cities.

Upcoming events in the city included the Australia-China Economic Ties: Time to Build Confidence conference on the 12th July at the Melbourne Convention and Exhibition Centre, as well as the Australian Agriculture Immersive Technology Conference from the 10th to the 11th of July at Melbourne’s South Wharf. A thoroughly vibrant, modern city, Melbourne is remarkable for both the diversity of its economic success and its liveability. Ever since the 1850’s Gold Rush that saw the city’s rapid expansion, Melbourne has maintained an enterprising spirit that informs its success in industries ranging from finance and manufacturing to transportation and tourism.