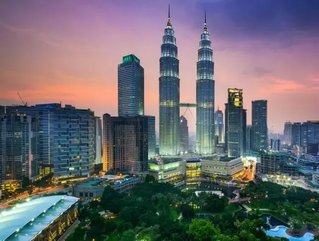 Known affectionately as KL to its citizens, Kuala Lumpur is a retail and tourism hub in Southeast Asia. Business Chief explores some the highlights of this exciting city

Meaning ‘muddy confluence’ in Malay, Kuala Lumpur became an established town circa 1857 when it was founded by Chinese tin miners, although there is no consensus on who named it as such. At that time, the small area that would one day become Malaysia’s largest city was little more than a handful of houses and amenities at the junction of Gombak and Klang rivers. Finally achieving the status of a city in 1972, it is now the recognised capital of Malaysia and covers a total land area of 94 square miles. With a population of approximately 1.8 million people, Kuala Lumpur is one of the most populated cities in the country. The citizens of the city refer to themselves as ‘KLites’ in reference to their preferred moniker for it: KL. A symbol of modernity in South-East Asia, Kuala Lumpur houses the Petronas Twin Towers on its skyline. The tallest twin buildings in the world at 1,482ft, the towers eclipse the second-largest building - Dubai’s JW Marriott Marquis hotel - by over 300ft.

Ranked in the top 11 of PwC’s Cities of Opportunity Index, Kuala Lumpur exhibits a rapidly developing economy with a GDP in excess of RM160.39bn (US$38bn). A recognised global city, Kuala Lumpur is an important fulcrum of finance, real estate, shipping, telecoms and media. Acting as a base of operations for 14 Forbes 2000 companies, industry luminaries such as Petronas, Tenaga Nasional, Sime Darby and Maxis have taken up headquarters within the city. By far the largest net contributors to the city’s economy are tourism and retail: renowned as a vibrant and accommodating shopping opportunity featuring 66 malls, the retail industry is estimated to have generated a total of almost RM107.5bn in 2019. Kuala Lumpur also recorded more than 13.8mn tourists in 2018, the third-largest influx in the Asia-Pacific region after Singapore (14.7mn) and Bangkok (22.8mn).

Containing over 1,000 stores across 7.5 million square feet of space spread over 10 storeys, the Berjaya Times Square shopping experience is one that cannot be rivalled, even in the very retail-friendly environment of Kuala Lumpur. Visited by more than 2.5 million people each month, the mall features 65 food outlets, everyday amenities (banks, pharmacies, a monorail stations and more), an IMAX theatre, spa, video game arcade, karaoke bar and over 1,200 luxury service suites, customers are guaranteed to find whatever they’re looking for. Owned by magnate Vincent Tan - founder of the Berjaya Corporation - the RM1.75bn building was opened in 2003 and is one of the largest shopping malls on Earth.

A low-cost airline originally founded in 1993, AirAsia is Malaysia’s largest airline by overall fleet size (255) and breadth of service - the company offers more than 165 destinations in 25 countries. The airline has generated revenues in excess of US$2bn and currently employs approximately 20,000 people worldwide. Despite being a low-cost operator, AirAsia has consistently been ranked as best-in-class for 11 years straight on SkyTrax’s ‘Best Low-Cost Airline’ list. The company has several affiliated operations, including AirAsia China, AirAsia Japan and AirAsia X. The latter is its long-haul budget option which operates flights to Australia and the US, amongst others.

The largest publicly-listed power on the MYX with assets of RM99bn, Tenaga Nasional Berhad (TNB) is an electrical utility company founded over 69 years ago. The company serves 9.2 million customers throughout Malaysia and focuses its core activities on power production and supply chain value. Dedicated to attaining its vision of being amongst the leading energy corporations in the world and fostering excellence in all of its products and services, TNB is active in Malaysian communities by establishing scholarships schemes and championing corporate responsibility. One such scheme is its 2011 Green Energy Policy, which pledges the company’s commitment to investing in renewable energy, as well as recognising an ash pond near its power station in Kapar, Selangor as a sanctuary for migratory shorebirds.

Indicative of Kuala Lumpur’s fast-expanding economy, the SME CEO Forum 2020: Customer Experience event will be held on 16 June and will bring together industry experts to pool their knowledge to find the best way of optimising the customer experience. Recognising this aspect of business as being fundamental to corporate strategies across both smaller and larger companies, the forum will seek to address key issues: increasing customer loyalty, improving customer satisfaction and how to generate more effective marketing. “Customer Experience encompasses every aspect of a company’s offering – the quality of customer care, but also advertising, packaging, product and service feature,” say the organisers. “Customer Experience is created by the contribution of not only by customers value but also by the contribution of the company providing the experience.”

The event will be highly informative for business owners in a city famous for delivering world-class retail and tourism services.