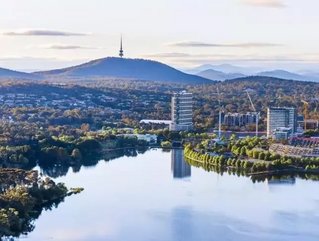 Canberra is Australia’s capital, located in the federal Australian Capital Territory, an enclave surrounded by New South Wales. Expressly built for the purpose of being the capital, the planned city is Australia’s eighth-largest, with a population of 395,790 as of 2016. Its closest major neighbour is Sydney, located some 170 miles to the north east. Human activity in the area began with Indigenous Australians. Settlement by Europeans began in the 1820s, but the location was chosen as Australia’s capital in the 1910s as the result of a compromise between the cities of Sydney and Melbourne.

Designed by American husband and wife architects Walter Burley Griffin and Marion Mahony Griffin, the city has a geometrical construction. Like other Australian cities including Melbourne, its construction was influenced by the UK-born garden city movement, and consequently green spaces are plentiful. Lake Burley Griffin, an artificial body of water named after the architect, is integral to the city’s design. Created from a dammed river and located in the middle of the city, the much delayed project was completed in 1964, almost 30 years after Burley Griffin’s death.

The city cannot be properly understood without reference to its role as Australia’s seat of power. As reported by ABC in 2017, of the more than 150,000 people who work for the Australian government nationwide, 38%, some 57,000 individuals, are based in Canberra. By comparison, the next largest host of the Australian Public Service, New South Wales, has half that amount. Parliament House, on Capital Hill in the centre of the city, was finished in 1988, replacing Old Parliament House, which was completed in 1927. With its two houses being the 76-seat Senate and the 151-seat House of Representatives, the building is a symbol of Australia at large, and attracts many visitors to the city.

Wind energy company Windlab was founded in 2003 and is headquartered in the centre of the city. The company has operations in Australia, South Africa, the US and Canada, and currently has a capacity of 1,093MW of renewable energy in its completed projects. The company claims to have generated 9,286,161MWh of energy and in doing so saved 7,543,947 tonnes of CO2 emission. On 6 August, a combined wind and solar project in Queensland was brought onto the grid by the company, delivering 43MW of wind and 15MW of solar capacity.

Located in the suburb of Fyshwick on Canberra’s eastern side, Seeing Machines develops hardware and software in the computer vision space. Its products can monitor drivers in automated vehicles to ensure that they remain alert, thus aiding the safety of the testing process. Its technologies are also applicable in the trucking and aviation industries. In March, the company revealed it had raised over AU$50mn of new investment. Seeing Machines was founded in 2001 and employs over 200 people. The company has worked with the likes of Caterpillar, Boeing and Panasonic.

Mineral Carbonation International (MCI) is a research engineering firm developing mineral carbonation technologies for the capture and storage of CO2. Inputting waste products into carbon reactors, the company hopes to use the carbonates the process produces in building products. A five-year research pilot funded by the Australian government finished in 2018, with the company now saying it is preparing for commercialisation. MCI was founded in 2013 and is headquartered in the city.

According to SGS Economics & Planning, Canberra’s 2017-18 GDP was AU$39.4bn, representing 2.2% of the nation’s GDP. Though public administration (the largest industry in the city) made no contribution to growth, SGS reported that in 2017-18, Canberra’s GDP grew by 4%. Partly this can be explained by the strength of the local economy. As the Australian Capital Territory Government reports, it has grown by 13.6% over the past three years, with a diverse base including tourism, international students and emerging industries. 10,000 new jobs were created in 2017-18, with 2,000 new businesses having appeared in the last three years.