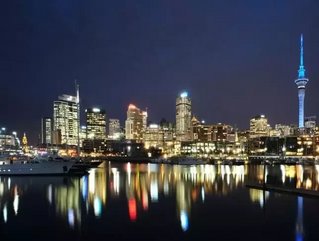 The capital of New Zealand until 1865, when it was replaced by Wellington, Auckland remains the largest urban area in the country. The city rests on an isthmus, only 2km across at its smallest point. Such unique geography means that the city is one of very few to have ports on two bodies of water; the Pacific Ocean and the Tasman Sea. As of the 2013 census, Statistics New Zealand gave the population of the city as approximately 1,415,550, representing 33.4% of New Zealand's total population. The same organisation said in 2018 that the city’s yearly GDP was NZ$101.4bn (US$66bn), equivalent to 37.5% of New Zealand's total GDP.

As chronicled by the website Emerging Auckland, the city is not resting on its laurels as New Zealand’s largest conurbation. Instead, the city is in the middle of a construction boom, with 2016 estimates suggesting NZ$10bn of investment is going into changing the city’s skyline. As reported by Stuff, private projects in the city include Commercial Bay, The Pacifica, Seascape and One Market Square. That private investment, focused in the central business district (CBD), is complemented by investment from the Auckland council. Their Auckland City Centre Masterplan features urban renewal plans for the city up to 2030. The investment encompasses infrastructure also, with construction on New Zealand’s largest ever transport infrastructure project, the City Rail Link, beginning in 2015. A 3.45km twin-tunnel underground rail link, it is said the initiative will double capacity on the rail network once it opens in 2024.

Flag carrier of New Zealand as a whole, Air New Zealand is headquartered in the Wynyard Quarter of Auckland. The company has a rich history, having been founded in 1940 as Tasman Empire Airways Limited (TEAL), an airline dedicated to ferrying mail, passengers and cargo between Australia and New Zealand across the Tasman Sea. Today, the company says it flies approximately 17mn passengers a year from, to and within the country. Its primary hub is Auckland airport, though it also operates out of Christchurch and Wellington, and as of 30 April 2019, there were 115 operating aircraft. The company reported its 2016 revenue as NZ$5.23bn (US$3.4bn).

Dairy co-operative Fonterra is New Zealand’s largest company. For the financial year ending in 2017, the company reported its revenue as NZ$19.232bn (US$12.5bn). Though based in Auckland as a co-operative, the company is diffuse and owned by around 10,000 farmers. It formed from the continuing amalgamation of a number of co-operatives, before the largest two of the remaining four New Zealand co-operatives joined in 2001. The vast majority of its products are exported, with its brands such as Anchor, Anmum, Anlene, NZMP and Farm Source going to over 140 countries.

Bank of New Zealand (BNZ) is one of the country’s big four banks, alongside Australia and New Zealand Banking Group, ASB Bank and Westpac. Since 1992, the bank has been a subsidiary of the National Australia Bank. Its revenue for FY18 was NZ$2.505bn (US$1.63bn). In 2018, the BNZ was awarded the title of ‘Small Business Bank of the Year 2018’ by Australian financial comparison firm Canstar, owing to its commitment of services and support to small businesses in New Zealand. Founded in 1861, its first office opened on Queen Street, Auckland in the same year.

Auckland is renowned for its role as New Zealand’s busiest transport hub, owing to its aforementioned ports, as well as its air links. As of March 2019, Auckland Airport said it had 75% of the share of international visitors to the country. Operating more than 178,000 flights each year, the airport saw 21mn yearly passengers and more than 187,000 tonnes of international freight. The city’s ports are collectively described by their operator, Ports of Auckland, as the busiest in New Zealand. The ports focus on the optimisation of the container terminal process, and consequently claim to be the most efficient in Australasia.

Upcoming events in the city include the FMCG Business Marketing Summit 2019 on 21 August at the Ellerslie Event Centre, as well as the “The End of Plastic as We Know It”, a conference by the Sustainable Business Network on 26 August at ASB Waterfront Theatre. Often considered to be one of the world’s most liveable cities, Auckland has taken advantage of its unique geography to propel itself into its current position as a thriving, growing metropolis, successful in both business and human terms.