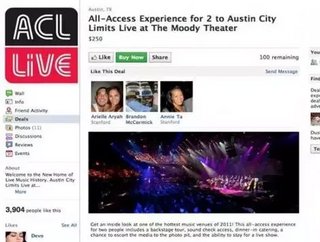 Just like the tablet wars that we talk about so often on Business Review Australia, the race for the best “daily deals site” is really starting to get ferocious. The Goliath of social media networks, Facebook, is the latest platform to begin offering online coupons. This is Facebook’s latest chess move to diversify its revenue stream beyond advertising and become a name in the rapidly growing online bargain space.

While it only started offering bargains to the US cities of Atlanta, Austin, Dallas, San Diego, and San Francisco on Tuesday, Facebook is claiming that its “Deals on Facebook” differs from competitors like Groupon and Living Social.

“While many Deals on Facebook offer discounts, it's more important to us that you find interesting experiences around you to do with friends. We've worked with partners and local businesses to help deliver the best social activities in your area. And once you've found a deal you like, having the deal on Facebook makes it easy to share, buy and plan with your friends,” Emily White, director of local at Facebook said Tuesday. Facebook’s deals program will emphasize group activities.

However, CNN is reporting that the Facebook bargains can’t compete with Groupon currently. “Groupon claims to offer discounts of 50% to 90%. Most of Facebook's coupons for Atlanta range from 13% to 75% off, with more of them seeming to fall on the lower end of that scale. Again, Facebook says the social aspect of these coupons is almost more important than the discount itself,” CNN said.

Facebook users can find deals through e-mail and notifications, as well as a useful Deals tab on the Facebook home page. Facebook “friends” can also pass along the latest deal.

Facebook is working with aDealio, Gilt City, HomeRun, kgb deals, OpenTable, Plum District, PopSugar City, ReachLocal, Tippr, viagogo, and zozi, so you can buy their Deals on Facebook, too.