Train travelin&#039; down an empty track 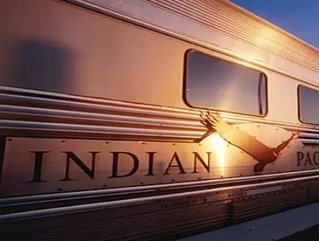 Australia’s most famous railway is in financial peril.

The Indian Pacific, which links Sydney and Perth across 4,352 kilometres of track, is world renowned for its scenic 65-hour journey that takes riders through Broken Hill, Adelaide, Cook, Kalgoorlie, and across the Nullarbor Plain. The trip is considered a must-do for tourists who have the time and money (and I can personally attest to its worthiness, having completed the entire trip in a ‘red service’ car equipped with only reclining seats. No beds for the budgeters!)

Unfortunately, time and money are two crucial elements that play into a traveller’s itinerary, and due to the increasingly competitive airline and cruise trip markets, the railway journey is losing riders – and therefore, services.

Beginning 28 March, Great Southern Rail announced that the Indian Pacific journey will cut its services down to one per week – two months earlier than usual. The Ghan, another famous railway linking Darwin to Adelaide through Alice Springs and the Red Centre, will also offer just one service per week starting 4 April.

"We have a lot of fixed costs before we even put a guest on the train,” GSR interim general manager Russell Westmoreland told News.com.au. “But we're competing with airlines, cheap holidays in Bali, Fiji and places like that, so have to be smarter about the ways we do things."

Fortunately, there may be a light at the end of the tunnel: GSR acknowledged that the uptick in Chinese tourists may be the train’s saving grace.

According to a September article published by Time, Australia has committed $30 million over three years towards attracting Chinese tourists Down Under. However, promoting cross-country train travel to these reported luxury seekers may be the railway’s biggest challenge.

"While the Indian Pacific has been well maintained, there is nothing new, like an observation deck, or a double-decker train cabin," said Golden Outback chief executive Jack Eerbeek. "Some of these new things could rekindle some interest in the product."