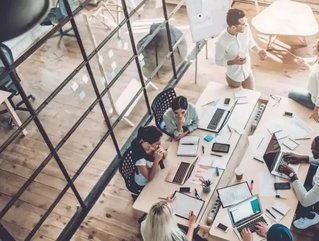 SoftBank Group, operator of the world’s largest private equity fund, is considering a majority stake in office space firm WeWork, according to The Wall Street Journal
WeWork is a startup, valued at around US$40bn, focused on providing shared office spaces for tech firms, as well as providing services for SMEs, large companies, entrepreneurs, and freelancers.
WSJ’s report said that the investment would fall between $15bn and $20bn and that the financing would likely come from SoftBank’s Vision Fund.
The Vision Fund’s $4.4bn investment in WeWork last year secured two seats on the startup’s board alongside a minority stake.
According to Reuters, its source said that there are currently no concrete plans or pricing strategies in place for the potential investment.
See more:
It added that SoftBank’s shares dropped by 5.4% on 10 October and that this was likely triggered by concerns over WeWork’s prospects.
WeWork itself is currently operating at a loss, and its performance is tied firmly to the state of the real estate market.
Reuters noted that a majority stake in WeWork would be a departure from SoftBank’s usual investment practise of taking minority stakes in strong, late-stage startups that offer less risk.
It cited its investments and minority stake in Uber as an example of the firm’s usual method.
SoftBankReal estateWeWorkVision Fund
Share
Share