Crisis in the South China Sea 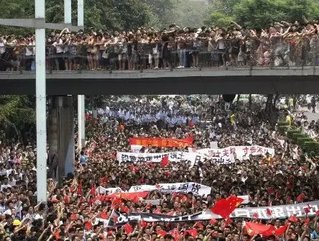 Two of Australia’s largest trading partners are embroiled in a diplomatic spat over disputed islands in the South China Sea. This has ignited fears that an ensuing trade war could damage the entire region, including Australia. With repercussion much greater than the land mass in question.

Violent protests have erupted across China over the Japanese government’s plan to nationalise the disputed islands, known as Diaoyu in Chinese and Senkaku in Japanese. There is the added complication that Taiwan also lays claim to the islands.

Mark Thirlwell, director of International Economy at the Lowy Institute said that the disruptions to Japanese factory production in China could ripple down the supply chain until they temporarily affect the demand for Australian commodities.

“This is happening at a time when the global trade and global economy isn’t doing too well anyway, so this is just another adverse shock,’’ he said. ‘‘It's another straw that you're piling on the camel's back.”

The tension in this region has also highlighted to the rest of the world the fragility of East Asia’s economic success.

The factory of the world has been able to grow exponentially based on the division of resources and labour made possible by free borders and political stability. Companies were able to spread the manufacture of goods across the whole region with free and easy transit between the different stages of production.

This seamless sourcing of parts and labour across borders underpinned the ‘Factory Asia’ model, and with political instability comes the possible end of economic prosperity.

Thirlwell compared the potential impact on global trade of the current China-Japan tension to that of the fallout of the March 2011 Tsunami in Japan.

The natural disaster prevented certain essential car parts and computer parts from being produced in Japan, which in turn disrupted the production of cars and computers worldwide.

Companies with investment strategies that rely on cross-border supply chains have in many cases evolved at a time when the realm of politics and economics were effectively disconnected, said Thirwell.

“If you think of the way we view the world today, it's becoming increasingly harder to disentangle the political risks from the economic risks,” he said.

The dispute between China and Japan brings this reality to the fore, yet it has also become the reality in Europe, where political discord underpins the sovereign debt crisis, as well as in the United States where ideological differences form a stumbling block for effective debt reduction and budgeting in Washington.