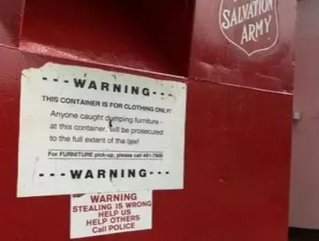 Charities across Australia such as the Salvation Army and St. Vincent de Paul Society are speaking out against the carbon tax, saying their operating costs will increase by $3.5 million annually as more people dump their unwanted goods in overflowing charity bins – or right on the organisations’ doorsteps.

“The carbon price is based on a 'polluter pays' philosophy and yet, once again, charitable recyclers will face soaring costs,” said an internal document obtained by the Daily Telegraph.

The document continued with the Salvos saying that the carbon tax was “unjust and unfair” as it would increase the cost of transporting unwanted clothing and furniture to the landfills. Approximately 25 per cent of goods donated to charitable organisations end up at local rubbish tips, the newspaper said.

The organisation said their landfill fees alone are expected to increase by up to $1.25 million after the tax goes into effect on 1 July.

"[It’s] another impost on our bottom line,” Salvos Stores COO Frank Staebe told the Telegraph. “What that really means is that less goes into social programs" and essential services for needy families.

According to the Herald Sun, these social services benefit around 300,000 people annually by way of emergency shelters and drug/alcohol counselling.