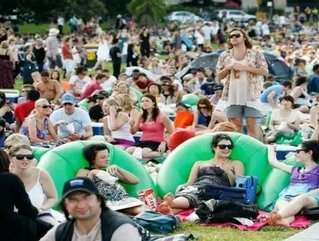 1. Looking back 20 years ago, did you expect (or fathom, really) that Tropfest would grow into such a large-scale, internationally-recognised festival?

Not at all. When Tropfest began it was really just a way for my extended group of friends to see a short film I had made. But something about that screening really connected with people and it’sbeen embraced by audiences in a way that I never anticipated, year in year out. It’s exciting because it shows that Australians – and others – really do want an alternative to mainstream movies; they want to support their local filmmakers/storytellers.

2. Which of your films was shown at that first screening at the Tropicana Caffe?

It was a film called Surry Hills: 902 Spring Roll. 11½ minutes of pure agony!

3. Why did you choose to focus the festival on 'short' films?

Practically, there really is no better way to express an idea as a young or emerging filmmaker than in a short film. You don’t need a huge budget and you don’t need a ‘green light’ from a bunch of executives somewhere.

Most importantly, when done well, short films have the ability to really connect emotionally with their audience. You can show a three three minute film to a room full of people who all speak different languages, yet they can all be laughing or smiling or crying as if on cue. Short films liberate ideas and express creativity in new ways, often in ways no other medium can, and I think that is something worth celebrating.

4. How was Sydney chosen as the festival's city venue?

Sydney was an obvious venue choice because I lived there! I had a short film that I wanted to show, so I approached the Tropicana Caffe in Darlinghurst (which was then practically my living room) and they let me hold a small screening for cast, crew and friends. Ridiculously, word got around and over 200 people showed up. I realised that there was a real need for this kind of festival in Australia. It all grew from that one idea.

5. How is each year's 'Tropfest Signature Item' (TSI) chosen? How was this first incorporated into the Tropfest film guidelines?

Tropfest is all about fostering creativity and new talent and the TSI encourages filmmakers to make new films, not just drag out last year’s work. So I realised almost straight away I needed a way to ensure people were making new films, not just pulling out their film school graduation film. There is no real process to how the TSI is chosen. Sometimes it is randomly selected by the Tropfest staff or we get inspiration from the suggestions that are emailed to us.

The TSI for Movie Extra Tropfest 2012 is ‘Light Bulb’ which came about because Tropfest is all about the strength of your idea, not your budget or your connections.

6. Will the festival ever charge for admission?

Never. Tropfest is free to audiences, wherever it happens in the world. That won’t change. We do everything we can to ensure that Tropfest remains true to the morals and ideas in which it was created: a truly free public event that supports talented filmmakers and fosters creative communities.

7. Who are the celebrity judges for the 2012 festival?

Well, that would be telling wouldn’t it?! We keep the identities of our celebrity judges under wraps until the very last minute…

8. What's in store for the 20th anniversary festival on 19 February?


We’ll be celebrating our 20th year by expanding Tropfest from the one-night ‘main event’ that it’s always been to three days/nights of festivities and celebrations: still the main event on Sunday, but Friday and Saturday will also include late night screenings, a filmmakers symposium and other great things.

9. Which cities are you planning to expand the festival to in the coming months/years?

We have just announced the return of Tropfest New York, which will take place in June 2012. That’s a pretty big deal because it’s the first time Tropfest will be a standalone event in the USA.

The inaugural Tropfest Arabia just took place in Abu Dhabi and was a huge success, so this will take place in November each year. And we’re in advanced discussions in other countries/cities which we’ll be announcing very soon. We’re still finalising venues for Tropfest Australia 2012, but so far we can confirm that New Zealand will be plugged in to Tropfest Australia for the very first time. We will also be returning to Melbourne, Canberra, Adelaide, Brisbane, Surfers Paradise and we have a brand new venue partner in Wollongong. So it’s a hugely busy and exciting time of growth for us.

10. Where do you see the festival - and the short film industry - heading in the next 20 years?

I have a belief that Tropfest competitions can take place in different countries every 6-8 weeks throughout the year. And that it will be almost as big in those countries as it’s become in its home country, Australia. And I know that, through the power of telling stories, we can continue to put forward the idea that countries and flags and religions and languages don’t matter. We are all residents of the same planet; and we all have a story to tell. And many of those stories are universally recognisable.

Think about it: if everyone has a story to tell, as we believe they do, that’s almost 7 billion stories. Where to start?

For more information about Tropfest Australia, check out http://tropfest.com/au/tsi/