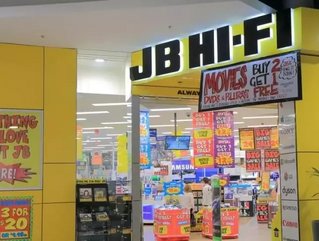 Electronics retailer JB Hi-Fi has announced that it is going to buy white goods giant The Good Guys at a cost of AU $870 million. The acquisition will propel JB into the market-leading position in both the consumer electronics and home appliances sectors.

Once the deal is complete, JB Hi-Fi’s share in the consumer electronics space will have leapt from 19 to 24 percent. But the firm’s real triumph will be in the white goods sector — with its share leaping from a humble three percent to 29 percent, surpassing rival Harvey Norman’s 24 percent portion.

The takeover is going to be funded by a share issue worth roughly $349 million, with an additional $500 million from new and existing debt facilities.

JB Hi-Fi is hoping to grow its market share in home appliances, and the acquisition of the 101-store Good Guys brand will boost JB’s network to some 295 locations. As it stands, The Good Guys is already a leader in the home appliance sector, with the single-largest slice of the market share at 26 percent.

"The acquisition is a very attractive strategic opportunity for JB Hi-Fi since The Good Guys is a highly complementary business which is aligned with our management philosophy and significantly enhances our offering in the $4.6 billion home appliances market," said JB Hi-Fi CEO Richard Murray in a statement.

Acting Good Guys CEO Michael Ford will retain his leadership role under JB Hi-Fi’s ownership. The acquisition has received the approval of the Australian Competition and Consumer Commission and will be completed by early 2017.