Sydney Gets a Liquid Makeover 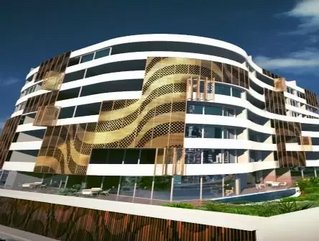 Moving away from the boxy design that plagues many of Sydney’s apartments, local architects Tony Owen and Kevin Ng are giving their buildings fluid curves and sophistication.

Called ‘liquid architecture,’ these new buildings feature the same efficiency and affordability qualities of their grid-like predecessors, but to an onlooker, the design is far more striking.

We now have the tools to create complex geometric forms as affordably as traditional designs,” said Owen.

Take Bay Street’s EOS in Brighton-le-Sands: the busy street is dotted with cafes and shops built in the same style until you reach this building. The graceful angles of the building’s façade allow in natural light and give it a beachside, whimsical appearance. According to the media release, the flowing structure was almost deemed too different from its surroundings to be approved for construction; fortunately, EOS eventually overcame this obstacle and now stands proudly in this southern Sydney suburb.

Breeze, a waterfront building with a fanned-out appearance in Drummoyne, provides access to the stunning views of the harbour and city beyond. The wood detailing is somewhat reminiscent of the 1970s and the façade may be controlled to allow more or less solar penetration, privacy, shelter and light.

Owen has another 30 or so forthcoming Sydney-based projects that will further exemplify his affinity with fluid geometries, and Ng will continue down a similar path, one he has carved with his Bronte House and Point Piper development.

As well as allowing us to create something interesting and unique, these designs give us the chance to experiment with different construction techniques and materials,” said Ng.