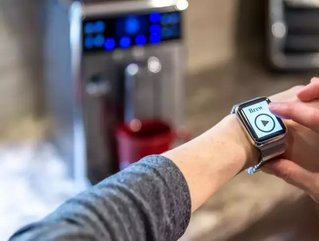 This was the 6th annual event, all of which have run with the slogan “open innovation city”. This year’s theme was the idea that “power to connect and get connected produces serendipity – give before you get”.

The event awards innovative technology startups and this year a running topic among winners was social value.

The Gold prize was awarded to Dot, a braille smart watch producer in South Korea, which retails at a reasonable $359.

The Silver prize went to Eyecontrol, which helps people with issues like “lock in syndrome” or LIS, which affects speech and movement. This often happens after strokes or to people with cerebral palsy or MD. Eyecontrol’s wearable technology reads people’s eye movements to allow them to communicate more easily.

Carbyne is a public safety service that upgrades emergency response systems to allow users to send information such as their location, personal data and video clips, to local authorities from their smart devices in an emergency.

Nature is a Japanese IoT company, and Nature Remo uses smart technology to control air conditioners in order to save energy.

Hack Osaka has stated it invites “people creating new values beyond existing notions as driving force in the rise of global innovation, to learn about their activities, discuss the required point of views for further innovation to change the world and the possibility of new industry for our future”. The business plan contest is just part of the event which also showcases new innovation.