No man’s land: Will factories of the future reserve a spot for human workers? 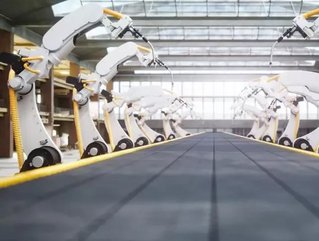 ‘Lights out’ factories, those that carry out automated tasks in the dark and require no on-site human presence, are not the only area of manufacturing methodology that is run by robotics. As manufacturing methods continue to develop, what will the increase in automation mean for Asia’s human workers? Here, John Young, APAC director at industrial equipment supplier EU Automation, explains why manufacturers must strike the balance between human and robotic labor.

Dimmed lighting, a lack of air conditioning and zero bathroom breaks. While these working conditions would normally result in a mass of complaints to the human resources department, the rise of the robotic workforce means that there’s simply no need for such amenities.

In today’s smart factories, automation is increasingly relied upon for factors as diverse as product quality, transportation of goods and digital twinning with augmented reality (AR). Manufacturers across the globe are taking measures to automate their facilities, but one region in particular is doing this far more than the rest.

Rise of the robots

Asia is the global leader in employing robots for manufacturing, holding an estimated 65 per cent of the world’s total use of industrial robots. The region also possesses the highest robot density, defined by the number of robots per 10,000 human workers. In 2016, South Korea had a robot density of 631 units — far exceeding the global average of 74 — and announced that it would spend $450 million over five years to continue growing its robotic footprint.

It is not difficult to see why Asia is so heavily invested in automation. With their ability to work quickly, precisely and tirelessly, robots are capable to delivering huge gains in productivity. In addition, for aging countries such as China and Japan where over one quarter of the population is aged over 65, automation is more necessary to bolster shrinking workforces.

Another perk of employing robotics is their ability to endure extremes. An offshore oil rig, for example, is one location where unmanned automation takes away the risk of human injury and withstands the demanding environment that working at sea entails. In fact, companies are already developing platforms that are completely automated.

Artificial intelligence (AI) is also increasingly changing production methods, as advances in data handling equip automation with more cognitive capabilities for autonomous decision making. In fully automated environments like lights-out factories, sourcing replacement parts is even more important. Using AI to spot abnormalities in output patterns, automation could be programmed to order spare parts from a reliable supplier so that they are readily available for maintenance teams to step in and make any necessary repairs without the need for extended periods of time on-site.

However, the growing recognition that automation is changing manufacturing is closely followed by a looming anxiety over what it will mean for human workers. According to the Massachusetts Institute of Technology (MIT) Review’s 2019 report, AI will affect one in five jobs in Asia while 12 per cent are at risk of automation.

Jobs with a high proportion of data collection, processing or routine physical tasks are the first wave to be hit by automation, including the production line. Low-cost and low-skilled labour forms the basis of Asia’s role as the “world’s factory”. As robots carry out increasingly complex tasks, this could spell trouble for a large quantity of the region’s working population.

In an increasing number of clothing and fabric facilities, for example, the workforce already blends human workers, who stitch materials by hand, and robots that carry out tasks faster and more productively. With both the world’s first and second largest apparel exporters located in Asia, it’s no surprise that companies are favouring automaton over human hands.

Despite understandable concern over the impact of automation, there is no need for immediate worry. Instead, it is crucial that companies are prepared for the increase in automation with strategies in place to accommodate all workers.

In fact, equipping workers with more digital skills can improve job security, rather than diminish it. Returning to the offshore oil rig example, unmanned automation requires continuous monitoring to ensure its success. For instance, this could involve a team of onshore engineers using interfaces such as supervisory control and data acquisition (SCADA) software. SCADA systems can be used to keep track of offshore processes, receive updates on machinery faults and plan required maintenance.

While fully automated offshore rigs provide the opportunity to increase productivity, they simply cannot function without human intelligence. Robots may be taking over risky, physical tasks, but they also require a team of re-skilled engineers to keep operations running smoothly. Instead of replacing the human workforce, this is changing the expectations — and skills requirements — placed upon them.

The MIT’s report also reveals that AI will augment around eight per cent of Asian jobs in the next five years. 77 per cent of surveyed business leaders predicted that this figure will continue to rise as the technology is deployed into more business areas. To sustain global competitiveness and hold its place as the world’s principal adopter of industrial robots, Asia needs to continue to invest in automation. However, its digital strategy shouldn’t come at a price. Instead, the region must invest equally in supporting job creation and retention without stifling innovation.

While switching the lights off and deploying robots is becoming a regular manufacturing method, the supervision that automation requires means that we cannot afford to leave skilled human workers in the dark.