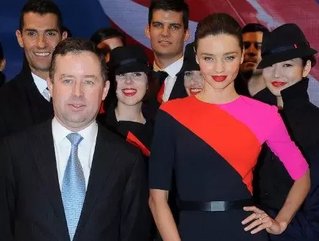 The new airline uniform includes a navy blue shift dress for women, with bold red and bright pink stripes emblazoned across the shoulder. It also has a flattering thin black belt.

The airline has unveiled the new uniform for its 12,600 cabin and ground staff, and it expects all staff will be wearing the new style by early next year.

Kerr first showed off the uniform to the world, on a catwalk painted to look like a runway. The Qantas ambassador led 32 staff, each modelling various different variations of the outfit.

The collection comes from Paris-based Australian designer Martin Grant, who has foregone the long-standing outback-chic colours of previous designer Peter Morrissey, to take his own route. Morrissey’s uniforms had been used for 12 years.

Over 300 Qantas staff attended the unveiling in Sydney's Hordern Pavilion yesterday, including Cate Blanchett and dozens of fashion bloggers, celebrities, reporters and paparazzi.

It's the 10th change of the Qantas uniform since it was introduced in 1948.