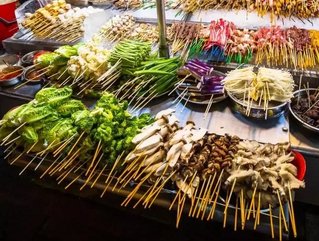 Known by locals as Krung Thep, the City of Angels, Bangkok is one of the world’s most vibrant and exciting cities. As the capital, financial hub and a key port of Thailand, Bangkok is both a major tourist destination and the nexus of Thai business, with nine of Thailand’s 10 largest firms headquartered in the city. Meandering through the city is the Chao Phraya River, defining Bangkok’s layout much like London’s River Thames. Bangkok’s 50 districts are split by the river, with 35 on the east bank and 15 on the west.

Bangkok, according to Mastercard’s Global Destination Cities Index, was 2017’s single most visited city in the world with 20.05mn visitors, and it is set to retain the crown in 2018 with a projected growth of 9.6%. Not only is Bangkok the world’s most prolific city for tourism, but its estimated growth in tourist figures is comfortably the second largest of Mastercard’s Top 10, behind Istanbul at 19.7% and leading Kuala Lumpur at 7.5%. With its wealth of culture and ubiquitous splashes of colour, it is no surprise that people flock to its wondrous sites. At its heart is the official home of Thailand’s monarchy, the Grand Palace, an incredible complex of architectural masterworks from Wat Phra Kaew (Temple of the Emerald Buddha) to the Chakri Maha Prasat (Grand Palace Hall) whose façade ingeniously blends Thai and European styles. According to Heinz Duthel in Duthel Thailand Guide III, the Chakri Maha Prasat was designed and constructed by English architect John Clunich and his assistant Henry C. Rose who had been hired by King Rama V after meeting them on a trip to Singapore and Java in 1875.

The most ardent shopaholics would struggle to find a more diversely stocked labyrinth of retail outlets than Bangkok’s Chatuchak Weekend Market, said to be among the world’s largest markets with over 8,000 stalls divided into 27 sections. Shoppers can find an eclectic assortment of goods including ceramics, books, antiques, pets, food and furniture. Retail is not the only thriving business to be found in Chatuchak, with gas and oil behemoth PTT headquartered in the district. PTT is the only Thai company in the 2018 Forbes Global 2000 to rank in the top 500 at #156, posting a market value of US$50.9bn. Other giants of Thai business situated in Bangkok include conglomerate Charoen Pokphand Group, cement and building material producer Siam Cement Group, Thai Oil, Thai Beverage, and Thai Airways.

A historic manufacturing hub thanks to the size and strength of its port, Bangkok remains the home of myriad manufacturing firms. Siam Cement Group established Bangkok’s first cement production facility in 1913, while textiles and clothing make up a considerable portion of manufacturing operations in modern Bangkok. Shoe manufacturer Pan Group operates the largest shoe factory in Thailand and also lays claim to being one of the biggest in the world, and is a leading producer of polyester, nylon, and polypropylene threads. PDK has also based its factory operations in the city.

While famous for its traffic, Bangkok is well-equipped for rapid travel between its major locations and landmarks. Connecting the city is the Bangkok Mass Transit System, known as either the BTS or the Skytrain, an elevated train network with 35 stops across two lines and around 700,000 daily passengers. While the Skytrain rolls above the city, beneath it lies the Metropolitan Rapid Transport (MRT) underground network, ensuring tourists and locals alike have a means to beat the congestion on the roads. For the rail-averse, Bangkok’s once prevailing mode of transport, the tuk-tuk, remains a must for tourists keen to soak up the city’s culture, while the capital’s increasingly iconic, colourful cabs often cost a similar amount for those happy to sacrifice speed for comfort. Finally, its intricate network of waterways feeding into and pouring from the Chao Phraya River offer a host of boat rides, tours, river taxis, and private cruises. Many view travelling by water as the definitive means of exploring the sights and sounds of Thailand’s City of Angels.

Outside the excitement of the city proper, any visitor would be remiss to forego the floating markets nearby. Damnoen Saduak, the most popular floating market in the country, offers the busiest experience, frequented by locals and tourists alike, as the historic tradition continues to form a significant part of rural Thai life. Here as with other floating markets near Bangkok, such as Khlong Lat Mayom and Amphawa, the food on offer caters to every taste, including exquisite local seafood, fried bananas, succulent fruits, an array of noodle dishes, and Thailand’s internationally renowned aromatic curries.

Perhaps Bangkok’s single most famous feature is its thriving nightlife. Away from the adult-themed entertainment of Soi Cowboy, Patpong, and Nana, there is no lack of stunning rooftop bars, high-class nightclubs and vibrant cocktail bars across the full spectrum of liveliness and tranquility. Famed for its inclusive and tolerant attitudes to the LGBT community, Thailand’s capital offers perhaps the definitive selection of gay night-time attractions in Southeast Asia with highlights including the three-level DJ Station, the Babylon complex of men’s saunas, gyms, pools, and restaurants, and the word-of-mouth Trasher events to name but a few. The enormity of Bangkok’s range of spectacles, entertainments, and culinary delights is set to ensure it remains the world’s most popular tourism destination for years to come.