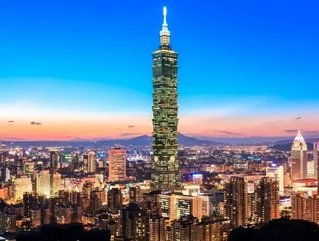 Located in the north of Taiwan, with a population of 2.7mn, Taipei is considered an Asian export hub, with a primary focus on high-tech electronics and machinery…

Of Tawain’s capital, Alex Scroxton wrote in Computer Weekly: “It is a humid, crowded and intense place, but for those who seek an understanding of the IT industry that goes beneath the surface, it is a place of pilgrimage.”

In 2016, Scroxton travelled to Taiwan to examine the ways in which the small, politically-isolated island is preparing to embrace “the next evolution of IT – the connected, digital, smart society and, of course, the internet of things(IoT).” IoT is predicted to be one of the world’s leading growth industries; according to an American Chamber of Commerce report in 2017, “IDC forecasts global annual growth of nearly 17% for IoT hardware, software, services, and connectivity. Another leading research firm, IHS, estimates that more than 30bn devices will be connected by 2020, with the number rising to 75bn by 2025.”

Taipei’s identity as a tech exporter results in an economy that is, to a large degree, linked to external markets. According to Forbes, “global strengthening should push growth to 3.6% this year and add another 0.1 percentage points in 2018, the IMF says.” While this heavy dependence on exports exposes the economy to fluctuations in global demand, rising demand for the semiconductors in the production of phones and PCs is predicted to put Taipei’s leading manufacturers in a powerful position to capitalise on the growing Internet of Things.

The Taiwanese government announced this year that is has allocated $357.9mn to the improvement of internet infrastructure, mobile broadband services, ecommerce, smart applications, test beds, industry-university collaboration, digital talent, and regulatory adjustment. The government has also set aside radio spectrum in the sub-gigahertz range for IoT use and has approved an initiative to ease restrictions on companies that invest in the IoT.

Additionally, large customer-facing corporations are making inroads in the IoT market. Taipei-based corporation Kbro Co. is the nation’s biggest cable television system operator. The company announced in March that it will be providing voice control services on Android-based set-top boxes later this year, according to a report in the Taipei Times. Kbro’s CTO, Alex Hsieh, said: “As voice control technology becomes more mature, it is time for us to embrace the IoT era.”

In addition to adding voice-control integration to its set-top boxes, Kbro announced its plans to include Chinese-language recognition platforms, and community projects like “smart surveillance services that could include time-lapse videos and a license plate recognition system”.

Kbro has set aside $68.3mn in capital spending this year to develop and deploy these new networks and features. The company hopes to increase its subscriber base by 50%, from 40,000 to 60,000 as a result of IoT-integrated services in 2018.

According to Scroxton, “it is not merely big hardware companies ... developing IoT systems in Taiwan”. Taipei-based startup incubator Mediatek Labs is “driving this explosion in devices by continuously innovating across a range of systems on a chip (SoCs) to deliver the processing power, battery life, compact size and sensing capabilities at the cost points needed for the mass market”. The company provided $300mn in funding worldwide in 2015.

The Taipei-based IoT hardware manufacturing startup Seraphim creates cutting-edge optical tech that sits “at the intersection of hardware and software for wearable technology”. One of its products, Odin, is a mouse that also uses lasers to project a functional workspace onto a desk. Another project, the Keybo, “is the world’s most advanced virtual laser projection keyboard and piano. In just a second, it can turn any flat surface into your keyboard or piano”. The product is currently being funded through Kickstarter. As Serafim CEO, GZ Chen, told Computer Weekly in 2016, “it is not easy to find money in Taiwan. We got out first funding round from Japanese investors”.

Now, however, with increased investment from the Taiwanese Government and the private sector, Taipei’s ecosystem is set to expand. Growth in overseas IoT spending will produce elevated demand for related hardware and tech in Taiwan’s capital.