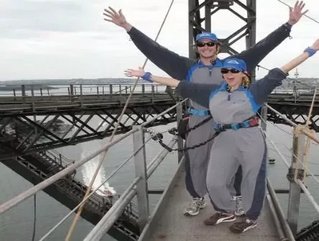 Eighty years ago today, my favourite Australian testament to strength – the Sydney Harbour Bridge – opened to the public. The bridge, affectionately referred to as the “Coat Hanger,” required the strength and dedication of 14,000 workers over the course of its nine year construction, and on opening day in 1932, more than 30,000 people showed up to be among the first to walk across it. Today, its arched steel frame is one of the most iconic images of Sydney.

The bridge has held a special place in my heart since I first moved to Sydney in 2008 and happened upon Circular Quay during my directionless wandering around the CBD. I still remember the tugging feeling in my chest as I stared up at the bridge’s monstrous frame above the shimmering harbour, overcome by its sheer size and its ability to take my attention away from the harbour’s other architectural celebrity, the Sydney Opera House.

Over the course of my 15-month stint living in Sydney, I climbed up one of the pylons and admired the 360-degree view of the city from its upper deck.  I sucked up my fear of heights, pulled on a gray jumpsuit, and climbed to the very top of the structure with BridgeClimb. I crossed the bridge by foot, car, train and Greyhound bus. I will never forget the feeling I had onboard that Greyhound bus as we reached Sydney, signalling the end of a 17-hour ride from Brisbane.  I woke up in my seat and peered through the window at the city skyline through the bars of the bridge, overcome with the joyous feeling that I had finally returned home.

To me, the bridge offered comfort; it was a shield of protection against my homesickness. Maybe this is because I grew up just outside San Francisco – another city known for its iconic water overpass – and I can’t cross the Golden Gate without a huge smile plastered over my face. Perhaps the incredible story behind the bridge’s construction and its unlikely opening during the Great Depression is what holds my attention and keeps me intrigued every time I’m within its vicinity. Regardless of the reason, from California or anywhere else in the world, I still feel connected to Australia whenever I see a photo of the bridge.

To my favourite Sydney icon, I wish you a very happy 80th birthday, and I hope to cross you again before your 90th.