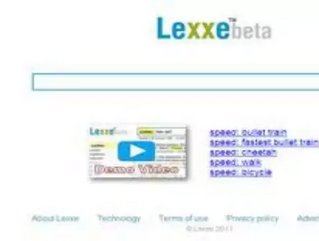 Using natural language search technology,  the key search comes in two types: word such as "colour," and number such as "distance."

“If someone wants [to] find out what colours are associated with Toyota Camry cars, they invariably type ‘colour Toyota Camry’ into a search engine’s query,” founder and CEO Dr. Hong Liang Qiao said in a press release. “Currently, search engines will at best, search and return documents with a combination of the words ‘colour’ and ‘Toyota Camry’ in the results, when in fact what the user really wants is to understand which colours are available, such as ‘red’, ‘black’, ‘white’ and so on.”

Upon its release on 3 November, the beta version supports approximately 500 semantic keys, and more are in the works.

The purpose of this Lexxe program is to target two main weaknesses in all of today's search engines: "specific" and "general" information searches. "Specific" information searches will allow users to find out which colours the Toyota Camry they want to buy come in. "General" information will reveal web pages found by Lexxe's sophisticated content knowledge database and linguistic algorithm, not strictly basing its results on keywords or webpage popularity. Therefore, Lexxe's results are more informative.

According to the press release about the program, "Lexxe judges on the ‘informativity’ (the degree of being informative) of the texts, and returns documents that are most relevant in content to the query, while popularity only plays a small part when there is a tie in relevance among web pages. In all environments, intranet or internet or personal data systems, Lexxe returns the most relevant documents through its content reading methods powered by its innovative linguistic algorithms and knowledge databases."

The beta version has been in development for the past six years. In 2005, Lexxe launched its alpha version, a program that featured Question Answering and other Natural Language search methods.

To learn more about Lexxe and to try out the search engine, please visit Lexxe beta version .