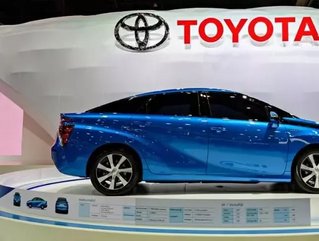 Toyota has brought three of its hydrogen fuel cell vehicles to Australia in order to promote the zero-emissions technology.

The Mirai is already on sale in Europe, Japan and California and uses an on-board fuel cell to convert hydrogen into electricity. The small demonstration fleet will be accompanied by a portable refuelling station, which will allow Toyota to tour the vehicle around the country for maximum exposure.

When the Mirai’s hydrogen supply is running low, it can be fully refuelled in a matter of minutes — a stark contrast to the longer charging times of most electric vehicles. The Mirai can travel roughly 500km before requiring a refill.

Appealing as the vehicles will be to customers, it will likely be a number of years before they’re commercially available. Dave Buttner, the President of Toyota Australia, explains that Australia doesn’t have the infrastructure required to support a large-scale rollout of hydrogen fuelled cars.

"This will take time to develop so it is imperative that we take a whole of industry approach so that we can move these plans along as quickly as possible,” he said.

"Fuel cell technology is expected to play a key role in the future and we do not want Australians to miss out on this.”

Other manufacturers currently trialling commercial hydrogen fuelled vehicles include Hyundai, Audi and Honda. The Toyota Mirai test fleet will be in Australia for the next three years.