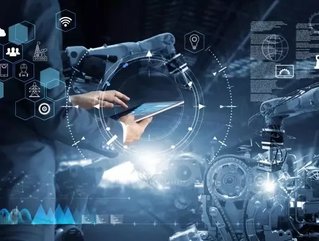 John Young, APAC Director at industrial equipment supplier EU Automation, takes a look at the trends set to shape automation in the year ahead.

With 5G’s rollout beginning to make waves, Tesla’s window-smashing launch of its Cybertruck and TikTok going from a fairly obscure social media platform to one of the most talked-about apps, 2019 welcomed a host of technological breakthroughs. But as we move into a new decade, what will 2020 mean for automation?

Over 20 years since Kevin Ashton coined the phrase ‘the Internet of Things’ (IoT), the manufacturing industry continues to develop ‘humanity’s nervous system’. Buoyed by a fast-growing economy, the tech-savvy Asia-Pacific (APAC) region has already paved the way for adopting innovations such as 5G and robotic process automation (RPA).

In fact, South Korea was the first market globally to launch commercial 5G, while a report by PWC reveals that APAC’s RPA market is expected to grow 203 per cent by 2021. So, where could automation take the region in 2020?

If the past decade has taught us anything, it’s that we need to act fast if we’re going to protect our planet. The 2010s will go down as the hottest decade in history, with seven of our planet’s ten hottest years ever recorded taking place over the past ten years. But as our landscapes have transformed, so too must our attitudes towards consumption — an area where the manufacturing industry holds great responsibility.

Currently, most facilities work following a linear model of make, use and dispose. This creates a lot of waste, as products have just one lifecycle, and leftover energy and materials are left to waste. A circular model allows manufacturers to keep everything in the supply chain in operation for as long as possible, including the goods they produce and the resources used to create them. For example, manufacturers can look at redirecting unused materials, such as wastewater from washing vegetables in a food manufacturing plant, for other tasks such as equipment washdowns.

As well as looking towards the future, manufacturers should also focus on their existing equipment in 2020. If a piece of equipment was to break down or experience wear and tear, manufacturers will be able to benefit the environment, their production line and their pockets by sourcing new parts from a reliable supplier, rather than getting rid of the entire machine.

Back in 2016, MIT spin-off technology startup, NuTononmy, launched its robo-taxi driverless car service in Singapore. While many autonomous vehicle services remain in trial stages, there are a number of areas of automation that are beginning to step away from human control.

Collaborative robots, or cobots, took the robotics market by storm during the 2010s. Enabling human and robot workers to complement each other and carry out tasks in harmony, cobots relieve the workforce from manual, straining tasks without detracting from their own skillset. While cobots will continue to be a rising trend over the next decade, so too will automation with even greater autonomy.

Autonomous things can include drones, robots, ships and appliances, which exploit artificial intelligence (AI) to carry out tasks in place of humans. Currently, autonomous technologies are mainly confined to controlled environments, such as ‘lights out’ factories. In these environments, autonomous machinery performs continuously with minimal human intervention. Robots are capable of carrying out a number of tasks, from picking and packing to even building fellow robots.

While automating tasks that were once carried out by human workers has been a growing trend for a number of years, it’s set to experience a renaissance. One of Gartner’s top strategic technology trends for 2020 is hyper-automation, which takes automated processes to the next level.

Hyper-automation encompasses the totality of a business’s automation network under a single umbrella, meaning that not one, but many, automated technologies work in congruence to augment or replace human capabilities. These technologies could include RPA, AI, machine learning and business management software, such as enterprise resource planning (ERP), which all work in sync to deliver a single solution. This approach refers to all the steps of automation, including the discovery, analysis design, automation, measurement, monitoring and reassessment.

The trend may have been kicked off with RPA, but Gartner states that RPA alone is not hyper-automation. While no single tool can replace human workers, hyper-automation’s belt of tools will allow better visualization of how key functions, processes and performance indicators interact to create business value.

As snappy social media videos and super speedy internet connections look set to dominate 2020, automation will also evolve. With environmental concerns at the top of many business’ agendas, it’s certain that material handling, asset management and maintenance will need to adapt. As automation continues to get smarter and technologies work closer together, we can also expect the evolution of a connected, hyper-automated production line to be on the cards for the future.